TV News: Ol' Salvo's back in Town (ie the return of Inspector Montalbano) 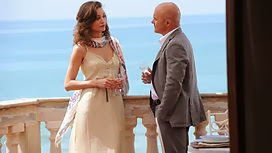 Inspector Montalbano (with Luca Zingaretti) returns to BBC Four on Saturday 19th October at 9pm with the first of four episodes (from 2013):

A series of burglaries takes place at the houses of wealthy Vigata residents. One of the victims is a beguiling young bank manager called Angelica, to whom Salvo finds he is soon attracted. As the investigation progresses, Montalbano starts to suspect that the burglaries might be a cover for something rather more sinister.

Angelica's Smile is based on Andrea Camilleri's seventeenth Montalbano novel, Il sorriso di Angelica, which is the next book to appear in English in June 2014 in both the US and the UK. At the rate I'm watching these I will have read the book first! But as the saying goes, one can never be too rich, too thin ... or have too much Montalbano (whatever his age).
Posted by Karen (Euro Crime) at 9:00 am

I think it was the infamous Mrs Wallis Warfield Simpson who made the comment about you can never be too thin or too rich. I have no doubt she would have added a comment about the Montalbanos if the TV series had been on during her time.