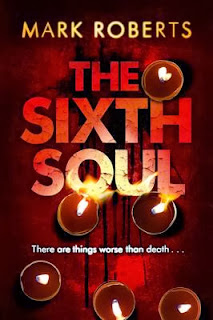 This book, which is Mark Roberts’ first venture into writing for adults, is absolutely mind blowing and at times downright chilling. It is perfect! However, his plot centres on a very sensitive subject area – the killing of pregnant women and the subsequent harvest of their unborn children – so it won't be suitable for everyone. There is one particularly gruesome murder scene that is so well written it could cause people who like their fiction a little less nasty some distress, but don’t let this put you off.

The book is set in London and the policeman whose unpleasant task it is to catch the latest serial killer is DCI David Rosen. David is a really likeable character and, as the book progresses, you like him more, not less. He is devoted to his wife, and she to him, and they support each other beautifully. Also, she is tolerant and understanding of his working hours, which makes a nice change. The killer, dubbed “Herod”, has killed four pregnant women, and removed their babies, prior to the start of the novel. The story begins with the capture of his fifth victim and then follows what he does to her after that. It soon becomes clear that he has an extremely unpleasant, occult-focused, reason for doing what he is doing and intends to capture a sixth and final woman to complete his plans.

Still very much in the dark and becoming increasingly desperate for clues, as well as under scrutiny from his bosses, who want to take the case away from him, Rosen is contacted by a strange priest, called Father Sebastian Flint, who used to work for the Vatican and claims he has experience of exorcism. Rosen doesn’t really trust Father Sebastian and digs out some very worrying information about him. Meanwhile, victim number five is discovered, dead and mutilated, and the race is on to catch the killer before he abducts his sixth and final victim.

True to form, I found this book entirely absorbing, despite its uncomfortable subject matter, and was on the edge of my seat for most of the two days I took to read it. If you like your crime fiction nasty then this one is for you. I have high hopes that Rosen and his team will come back in another book to make this a trilogy or a series, we will have to see…

Read another Euro Crime review of THE SIXTH SOUL.