Review: The Healer by Antti Tuomainen 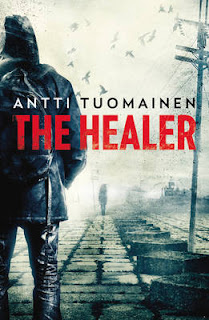 
Antti Tuomainen's THE HEALER is set in an unspecified but future time when climate change has meant environmental and economic disaster. Those who can afford to flee further north than Helsinki, the setting of THE HEALER, and inhabitants of southern Europe are shifting northwards. Increased rain and sea levels have left countless people homeless and made many parts of Helsinki uninhabitable.

The protagonist of THE HEALER is Tapani, a poet who hasn't sold anything for several years. His wife Johanna is a journalist, trying to cover important issues rather that the lightweight celebrity news that a depressed readership craves. And then she goes missing.

Tapani knows that his wife has been covering 'The Healer' case - that of a serial killer who has been targeting wealthy businesspeople and their families - people who could have done something about climate change if they hadn't been so greedy, in the killer's opinion.

Tapani sets off to find his wife and is aided in his quest unexpectedly by the policeman in charge of The Healer case - a man who is a police officer to his core despite the dismal situation the world finds itself in.

Tapani's investigations takes the reader on a tour of Helsinki, interspersed with flashbacks to happier times with his wife, as he uncovers secrets and finds that he may not know those closest to him as well as he thought.

THE HEALER, like several books I've reviewed recently is full of atmosphere, albeit a gloomy rain-sodden one, slightly at the expense of the action. The plot, tied up refreshingly in less than 250 pages, could be said to be very well constructed or, equally, heavily laden with coincidences but it works in the main. Although called 'The Healer', the book is not about him, it is about a man trying to find his wife: a very noir, amateur private detective story. There are some interesting secondary characters: the policeman mentioned above and an immigrant taxi-driver who chauffeurs Tapani around.

Readers of Scandinavian crime fiction will probably by now feel at home in Stockholm's Gamla Stan or on Oslo's Sofies gate and the slowly increasing number of Finnish crime novels available in translation may mean that Helsinki becomes an equally familiar place. At the moment though, the futuristic Helsinki in the THE HEALER seemed to me a very alien place, it almost could be on a different planet.

THE HEALER is an unusual crime novel and the ethereal tone is reminiscent of Jan Costin Wagner's Kimmo Joentaa series, also set in Finland.

Read another review of THE HEALER.