The first five books in Swedish author Arne Dahl's 'Intercrime' series have been adapted for television, two episodes per book. The series begins on BBC4 on Saturday 6 April at 9pm with the first part of The Blinded Man (aka Misterioso).

The Blinded Man tr. Tiina Nunnally, is available in English and the sequel Bad Blood is out in July. 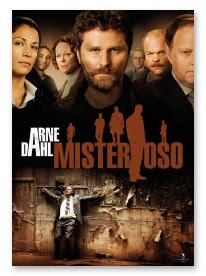 High-flying financiers are being murdered and it is beginning to appear like the work of a serial killer. CID inspector Jenny Hultin puts together a team of top detectives to crack the case swiftly before there are more deaths and a national panic. One of the team, Paul Hjelm, is saved from a disciplinary hearing for shooting a hostage taker when he said he was unarmed. Together with his new colleagues he finds himself working 24 hours a day in shifts to find the killer quickly. They are 'A Unit' and their pursuit of the Fat Cat Killer will expose tensions within the newly-formed group and put some of them in fear of their lives. And what do the financier killings have to do with the Estonian mafia and the discovery of a dead robber in an empty bank with a dart in his eye?


There's more about the tv series on Arne Dahl's website.