Review: The Dance of the Seagull by Andrea Camilleri 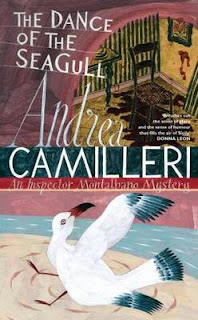 Montalbano's long-distance girlfriend Livia flies in to go on holiday with Montabano to another part of the island but Montalbano's not happy about it:

I wouldn't want to run into a film crew shooting an episode of that television series just as we're walking around there...They film them around there you know.

...And what if I find myself face to face with the actor who plays me?

….he's totally bald, whereas I've got more hair than I know what to do with!

Before he and Livia get away however, it seems that Fazio has disappeared. He had told his wife he was meeting Montalbano at the port the previous night and hasn't been seen since. Montalbano has to find out what Fazio's been up to and rescue his friend, if he's been captured, or worse find his body. So begins an investigation which encompasses several deaths, romantic subterfuge and ends with a risky plan to bring down the culprits.

THE DANCE OF THE SEAGULL is Montalbano firing on all cylinders as he outwits those who would hurt his “family” and brings justice to those who consider themselves untouchable. Montalbano, in the main, is as open-minded and compassionate as we've come to expect with the victims and family of victims, with one exception – he is unpleasantly harsh with one victim/witness, which seemed out of character. His relationship with Livia is still as prickly as ever though. The usual mix of wit, food descriptions and political observations run through the narrative and I found myself chuckling regularly. After the slightly weak THE AGE OF DOUBT – the events in which are not referred to at all in this book and despite the similar port setting – this was a real treat.

As I always do, I recommend starting from the beginning, THE SHAPE OF WATER, if you've not read any before, partly because this is a great series but also to follow Montalbano's ageing and how he rails against it and to understand the background to his internal arguments with 'Montalbano One' and 'Two' who are introduced a few books in.
Posted by Karen (Euro Crime) at 9:00 am

Labels: Andrea Camilleri, Reviews, The Dance of the Seagull

I am a huge fan of the TV series and have decided to read the series in order as I am sure there are more details contained. I found that with the first.

How funny that there are references to filming the series.

Karen - Thanks for the fine review (as ever). I'm a fan of this series, so it's good to hear you enjoyed this one as much as you did. And I couldn't agree more that this is one of those series that's best read in order if possible.

This is a good one in the series starring Montalbano. He certainly was very kind towards his fellow officer and concerned.

He did have his moments of mercurial behavior, that is true, but I find he often does quickly change moods.

All in all, it's a good book. I, too, was laughing at some of the lines and thoughts, including his foray to his favorite cafe and hiding out, as the commissioner was about to dine there, too.

I await the next book, as we never seem to get enough of the curmudgeonly inspector and his team. Catarella was hilarious, as usual.

This is one of the stronger books and very enjoyable after the previous few which, to me, were a bit weak. I think this book version is even better than the film version.