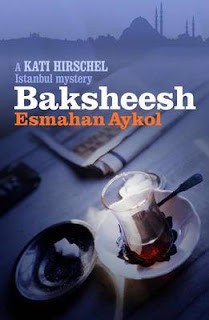 
BAKSHEESH is the second of the Kati Hirschel mysteries, following on from HOTEL BOSPHORUS.

Kati Hirschel is the forty-something owner of a specialist crime bookshop in Istanbul. Her parents are German but she was born in Istanbul and has spent time living in both countries and speaks Turkish with a slight accent. She borrows a phrase from Jakob Arjouni's HAPPY BIRTHDAY, TURK (which features a German born to Turkish parents):

..man opposite interrupted to compliment me on my Turkish.
In revenge, I said, “Oh yes? You, too, speak very good Turkish.”
I have to confess it wasn't original – I pinched it from a novel.

Kati's landlord has put her rent up to such a degree that she decides that it's time to own her own property. With a little bribery, the use of baksheesh, you can get first dibs on repossessed properties. When she goes to look at a potential home, an apartment, she gets into an argument with the man currently using it. So much so that he later appears at her shop, where she hits him with an ashtray in self-defence.

So when the man is found dead she is dragged in by the police. To clear her name she sets out to find out who the real murderer is and her investigation leads her to meet different strata of Turkish society.

Though BAKSHEESH has a typical amateur sleuth set-up the strength of the book is in the atmosphere of Istanbul and its society and culture as experienced by a semi-outsider. The different areas of Istanbul have their own reputations as does the country outside Istanbul. Also mentioned are the reasons for people coming to Istanbul, the story of family feuds, as well as customs for when you have visitors and so on. (We also get a look at how Kati perceives Germans.) The “genuine” reason for Kati to sleuth is soon dispensed with however she continues her investigation due to her curiosity and it's best not to think too much about the why and just enjoy the journey which is recounted in a breezy, humorous and intimate way.

BAKSHEESH is an enjoyable book which manages to immerse you in Istanbul, introduce you to some interesting characters and include a murder-mystery all in around 250 pages. Fans of Mehmet Murat Somer should also enjoy this series.
Posted by Karen (Euro Crime) at 9:00 am

Karen - I'm glad you enjoyed this. It certainly does sound like a novel that's full of fascinating atmosphere. I don't know nearly enough about Istanbul but it's a great setting for a series. And a well-told story at around 250 pages? So much the better! Thanks for the fine review.