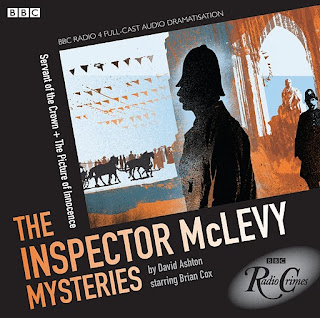 Servant of the Crown is the fourth and last episode of the third series (2003) and The Picture of Innocence is from the seventh (2009) which rather explains why they don't follow on. They are both very good episodes so whether they have been cherry-picked or maybe it's because they have the theme of justice. Justice is achieved in one but not the other.

Servant of the Crown has Queen Victoria visiting Edinburgh but there are rumours of an assassination attempt. There are many ex-soldiers discontented after the Crimean War. McLevy and his sidekick, Mulholland are assigned to track the assassin down as he is thought to be in Leith, a district McLevy knows well. The story also follows Tom Lambert, a former soldier now working for the Government and the two threads overlap and then form one.

The Picture of Innocence tells the story of Judith Pearson whose husband, a judge, suddenly dies. When she asks for an autopsy he is found to be full of arsenic and she falls under suspicion of murder. Judith writes to McLevy protesting her innocence and asks him to help her. He takes pleasure in undermining the detective in charge of the case and his investigations reveal a surprising conclusion. The other thread is that of a street salesman selling a potion to quieten fractious children which has almost resulted in an overdose of two young twins. Again, one story-line weaves into the other and leads to vital information.

I enjoyed these two mysteries very much. There's something alive about them. A bustling world is recreated and the cast is excellent. There's a smattering of Scottish words to keep you on their toes, and the tone is a bit bawdier than in the Father Paolo Baldi mysteries! Servant of the Crown does contain a gurgling death scene which was actually quite moving and The Picture of Innocence is a good puzzle. I plan to seek out more of this series.

The McLevy mysteries are based on the memoirs of a real-life policeman and David Ashton has also written three books featuring McLevy: Shadow of the Serpent, Fall from Grace and Trick of the Light (which incidentally are very cheap for the Kindle.)
Posted by Karen (Euro Crime) at 1:46 pm

Thanks for posting this. I haven't heard of these and will definitely put them on my list.
Ann