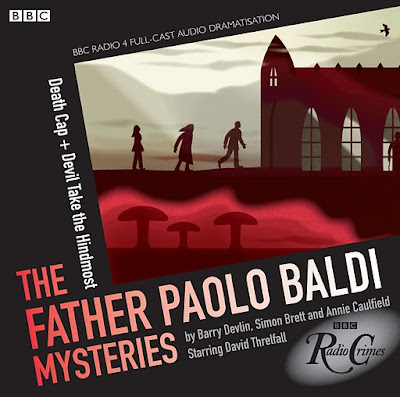 This is a release of the last two episodes in the first series of the Father Paolo Baldi Mysteries and were originally broadcast in 2000. Currently there are five series and twenty-eight episodes. Paolo is played by David Threlfall from Shameless.

In these two, Paolo is a priest who is working as a lecturer in Dublin, taking a year out from his priestly duties.

In Death Cap Paolo is spending the weekend in a retreat at a monastery in the country where he is joined by another refugee from modern life. They are made welcome by the brothers though the occupancy is much reduced. An elderly priest goes missing and when he's found dead it's soon found to be murder. Paolo gently investigates and his close friend Garda (DI) Tina Mahon soon joins him. The denouement is a traditional set-up such as you'd find these days in tv's The Mentalist.

Devil take the Hindmost is set in the college where Paolo works. He's having to decide whether to return to the priesthood or leave and his (platonic) relationship with Tina is making it hard. A fire on campus leaves a dead student behind. The student and his friends call themselves The Four Horsemen and seem to be dabbling in the darker arts. The friends claim it was suicide but repeated questioning from Tina and Paolo reveals the truth.

These cases are a cd each, lasting forty-five minutes, and are intriguing mysteries given the short-length and hold the attention, and as they are radio productions there's no bad-language or gore. The characters are only lightly sketched in but I did like the strong female detective, played by Tina Kellegher. Despite the Italian-name, Paolo speaks with an English (Manchester?) accent - this may be explained in the earlier mysteries.

The end of the second case leaves Paolo having made his decision and I'd be interested to see how that works out for him. The second series is currently being broadcast on Radio Four Extra.
Posted by Karen (Euro Crime) at 10:54 am