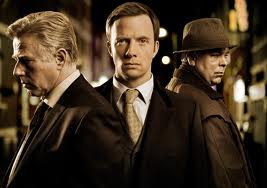 The three leads from Whitechapel I and II are set to return in 2012 in another outing. From the ITV website:

Following the massive success of the first two runs, Whitechapel will return in 2012 with a new six-part series.

The intrepid team tracked down a blood-thirsty Jack the Ripper copycat in series one and faced off against the gangster brutality of a new generation of Krays in series two. But now they are now faced with a whole new set of challenges…

The new series will find DI Chandler (Rupert Penry-Jones), DS Miles (Phil Davis) and Edward Buchan (Steve Pemberton) spreading their investigations beyond the boundaries of Whitechapel, as they peel back the layers of some of the East End’s most gruesome history.