I thought I'd post my review straight into the blog so people can comment on it and the Wallander series if they so wish. The Troubled Man is published today. 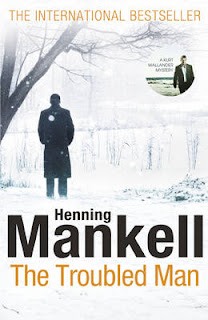 Is there something special about having a ten-book series? Sjowall and Wahloo wrote ten Martin Becks, Stieg Larsson was set to write ten about Millennium and now Henning Mankell's tenth and final book about Kurt Wallander has been published in English.

Wallander is now sixty and there are few recognisable faces from the earlier books, except for his colleague Martinsson and daughter Linda. Linda has settled down with a financier, Hans von Enke and they have a new-born daughter. Wallander meets Hans's parents Louise and Hakan, and Hakan, a former high-up in the navy, makes him feel very welcome, and at Hakan's 75th birthday party he corners Wallander and tells him a tale about a cover-up of Russian submarines being in Swedish waters back in the 80s. Wallander thinks Hakan looks worried and sure enough, he vanishes; he goes out on his regular walk and does not return. Though not in charge of the case Wallander makes enquiries of his own. He concludes nothing and then there is a second disappearance and then a body is found.

Wallander's investigation reveals deep family secrets and quite a bit about recent Swedish naval history, and eventually he gets to the bottom of the case, but THE TROUBLED MAN is more than a straightforward police procedural. Wallander is not a particularly happy person at the best of times but working on his own, during his summer holiday, there is plenty of time for morose introspection; he revisits his life and achievements, his relationships with Linda, his ex-wife Mona and other people that meant something to him. There are also references to the earlier cases and there is a sense of all loose ends having been tied up.

The mystery is intriguing and there is the fascination to see how an established series is concluded – see Ian Rankin's Rebus – and this series is well wrapped up but the final few sentences left me quite upset, even though the signs were there all along. THE TROUBLED MAN had me gripped but ultimately, saddened that there would be no more in this series and just plain sad at the way it ended.
Posted by Karen (Euro Crime) at 3:00 pm

Karen - Thanks for this fine review. I like the Wallander series, so I'm sure I'll like this one, too. I find it interesting to look at the ways in which authors end their series so, although it may be a sad ending, I am keen to see how Mankell has ended his....

i've only read 'before the frost' by mankell. do u recommend reading the series in order?

Anna - most definitely in my view, as there is a story arc about Wallander's personal/family life. However, be warned that the order the books were translated is not the same as the order they were written. If you check Mankell's entry on the Euro Crime website you'll see the correct "reading order" based on original pub date in Sweden.

I enjoyed the novel, but had some problems with it. I have my review scheduled for Wed., but am adding a link to your review.

Heartbreaking ending. Hated Mankell for not allowing him a happy ever after

I must say, it seemed to me that Mankell couldn't wash his hands of Wallander any more brusquely. It was as if by the time he got to the end of this book, he was sooooo ready to be done that he couldn't even be bothered to tie up all the little mysteries in the story. Life may be like that, all the answers are not supplied, but we generally expect a detective novel to provide a more satisfying wrap up. Why put those details in if you are going to use them only to taunt your readers? I've read all but two of the books and I always enjoy them. I can see why it would make artistic sense to give Wallander a melancholy end, but this fate was crueler than it needed to be.