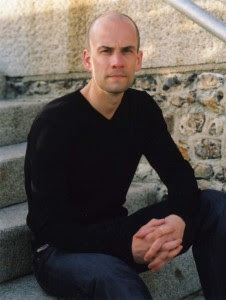 Maxine Clarke, in her review of Rupture for Euro Crime wrote: "The book is a short masterpiece, and one that everyone should read to experience what it can really be like when institutionalised bullying, violence and protectionism are allowed to continue unchecked. Chillingly realistic, this novel is a Lord of the Flies for a new generation."
(Read her whole review here.)

Simon's second novel is The Facility which was published in January: 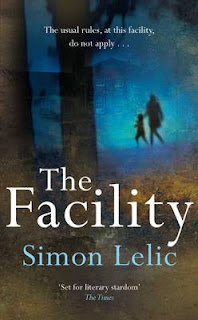 Synopsis: Henry Graves has dedicated his life to the prison service, but he is unprepared for the challenge his new and secret assignment brings. Tasked with managing a government facility hidden deep in the countryside, Henry finds himself tested as never before: by the confused and frightened prisoners, by the sinister Dr Silk and, above all, by his conscience. Tom Clarke, a precocious but naive journalist, has his own problems meanwhile. His career - and his life - is turned upside down by the arrival of Julia Priestley, who seeks his help in finding her estranged husband, Arthur, an innocent dentist who has been arrested under severe new anti-terrorism legislation. The authorities admit they have taken him but will not say where he is being held - or why. Discovering a trail that implicates those at the very top of government, Tom and Julia begin a quest to find Arthur, and the truth about his incarceration. But some people will stop at nothing to keep the facility's secret hidden, and soon the couple find themselves fighting for their lives...

You can find out more about Simon and his books on his website plus he is currently doing a virtual tour of several blogs. His previous stop was at Confessions of a Mystery Novelist where Margot poses some interesting questions and you can follow the tour's progress at UK & Beyond Book Tours.

And now the bit you've come for, a guest post from Simon Lelic on the subject of whether he writes crime fiction or literary fiction...

I don't read crime novels. I didn't think I wrote them either but after my first novel, Rupture, was published, I discovered that, actually, I do – at least according to some of the agents and publishers who were interested in taking on the book, the bookshops that now stock it, the reviewers who, well, review it. Note some. That is, not all. Others maintain that I do indeed write literary fiction, just as I had suspected and, initially at least, had hoped.

Which is all very confusing. At least, it could be. The truth is, I have actually found this instinct to categorise illuminating. It has helped me to understand just how subjective and porous such definitions can be. In a recent article in the Guardian, for example, John Mullan explains how the term 'literary' can imply anything from 'pretentious' and 'plot-free' to novels that ask us 'to attend to the manner of their telling', and 'invite discrimination' because such fiction 'calls attention to form'. Which seems fairly comprehensive – and suitably nebulous – to me.

Likewise, 'crime' fiction is . . . what? Books that adhere to the conventions of the genre? There is no police detective in my second novel, The Facility. There is no crime (in the traditional sense) nor an unmasking of whodunnit – yet still the first review to appear (in Red magazine) described the novel as 'an elegant crime thriller'. Similarly, the Telegraph said of Rupture that it was a 'superior detective novel, proof that crime fiction can break free of the bounds of the genre into something much more complex'. Which means it is literary fiction then, right? A detective novel but also something more? Great! Except . . . Hang on. Does this mean the book is actually pretentious and plot-free?

Don’t get me wrong: in a world tyrannised by choice, labels of all kind have their uses. They can guide us, and keep us from feeling overwhelmed. But they can be misleading too. They can build barriers, boxing us in or, worse, out. In my experience as a reader, I can certainly testify to that.

And so I maintain: I don't read crime novels. I don't read literary novels either. I read novels that I find engaging – through their prose, their characters, their plots – whether they are genre A or genre B or genre A + B + C. On my holiday last week, for instance, I carried in my suitcase books by Colm Thóibín, China Miéville and Scott Turow. A literary writer, a SF writer, a crime writer – or just good novelists, as I aspire to be?

Rupture is published by Picador and is available now in paperback. The Facility is out now in Mantle hardback. For more information about Simon Lelic, visit www.simonlelic.com.

Many thanks to Simon and Naomi at UK & Beyond Book Tours for contributing to and arranging for this post.
Posted by Karen (Euro Crime) at 12:30 pm

Simon is on my TBR pile - looking forward to reading him. I enjoyed his take on the whole classification thing. Regardless of which hole the pigeon sits in, all we want is a good book.