BBC4 is spoiling us (aka the return of Spiral)

Having bought and shown the excellent The Killing (still to be completed in this household at the time of writing), BBC Four are following it up with double episodes of series 3 of...Spiral.

The Butcher of La Villette begins next Saturday at 9pm on BBC Four. 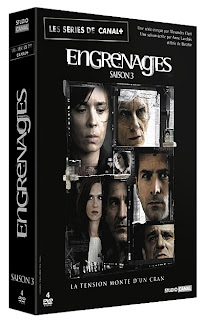 When the body of a young woman is found murdered and mutilated, police captain Laure Berthaud seizes the opportunity to redeem a tarnished reputation and leads her squad on the hunt for the sadistic killer. Meanwhile, Judge Roban's investigation into the case of a child being bitten by a dog might turn out to have broader implications, and even public prosecutor Pierre Clement is not immune from the resulting pressure.

The first two series can be bought on DVD as a boxed set for £16 on amazon.co.uk or play.com.
Posted by Karen (Euro Crime) at 2:15 pm

Great news, but I am worried that carbon based life forms of the female gender won't be able to stand the excitement of that series with Professor Brian Cox followed by Spiral with Pierre Clement.

Can't wait for the U.S. version of "The Killing" to start on April 3 on AMC. The suspense is growing.

The US version of The Killing??? Oh, God help us all! Why does America feel the nerve to crap on everybody else's parade?
Envy is never an excuse to badly copy a great original. Back off, US!
Thankfully, 2nd series of The Killing is coming to Four sometime very soon.
Last eps of Spiral 3 tonight! Makes me sad to think it's going to be over, but my DVD of 1st and 2nd series is in the post so, if I can just hang on 'til Monday... ;)