Seems every week, I add another book to my amazon list of Scandinavian Crime Fiction published in 2011 which is now up to 23.

The Boy in the Suitcase: A Nina Borg Mystery Set in Denmark by Lene Kaaberbol and Agnete Friis will be published in the US in November (no UK release date yet) by Soho Crime who write:

Lene Kaaberbøl has sold more than two million books worldwide as a fantasy writer. Her collaborator, Agnete Friis, is a children’s writer. Their bestselling Nina Borg series has been translated into nine languages and was a finalist for the coveted Scandinavian Glass Key Crime Fiction Award. 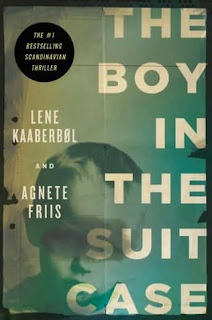 Nina Borg, a Red Cross nurse, wife, and mother of two, is trying to live a quiet life. The last thing her husband wants is for her to go running off on another dangerous mission to save or protect illegal refugees. But when Nina's estranged friend Karin leaves Nina a key to a public locker in the Copenhagen train station and begs her to take care of its contents, Nina gets suckered into her most dangerous case yet. Because inside the suitcase is a three-year-old boy: naked and drugged, but alive.

Nina's natural instinct is to rescue the boy, but she knows the situation is risky. Is the boy a victim of child trafficking? Can he be turned over to authorities, or will they only return him to whoever sold him? In an increasingly desperate trek across Denmark, Nina tries to figure out who the boy is, where he belongs, and who exactly is trying to hunt him down. Whoever put the boy in the suitcase put him there for a reason, and was not intending Nina to be the one to take him. When Karin is discovered brutally murdered, Nina realizes that her life and the boy's are in jeopardy, too.

I'm not sure who is translating.
Posted by Karen (Euro Crime) at 7:50 am

Lene Kaaberbol is the translator.

Thanks both for the information. I've added Unwanted to my database and amazon list.