Review: Library of the Dead by Glenn Cooper

Occasionally a non "euro crime" review book turns up in my parcel box and in this instance I knew that reviewer Amanda Gillies would probably enjoy it and she did... 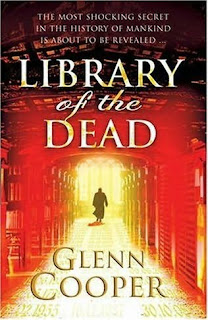 This is a debut novel for Glenn Cooper and it is simply awesome! It starts out looking and feeling like another pretty much straightforward hunt for a serial murderer, but this couldn't be further from the truth. It follows three separate timelines and the hunt for the killer is only the very tip of the iceberg.

Set in New York, Las Vegas and, finally, Los Angeles, the 2009 section of the story is fast paced and full of tension. It centres on the lives of two former college room-mates after they meet up for a 25-year anniversary dinner. One of these, Will Piper, is a disgraced FBI special agent who just wants to make it to retirement with as little pressure, and as much alcohol, as possible. The other, Mark Shackleton works in computer security for Area 51 – the infamous, top secret, government facility that is supposedly involved in UFO research.

The second timeline is just post WWII and concerns a mysterious Anglo-American co-operation that sees Winston Churchill called in to assist with a very serious matter not long after his defeat in Parliament. He telephones Harry Truman with the news of a disturbing discovery and an urgent request for help. The consequences of their actions pave the way for the modern American security system, in order to bury a terrible secret that must never become general knowledge.

The earliest timeline starts some 1,400 years earlier and is, perhaps, the most disturbing of all. It is based in an abbey on the Isle of White and concerns the terrifying consequences of the birth of a seventh son of a seventh son on the 7th day of the 7th month in the year 777. This part of the story sets the rest of it in motion and triggers the horrifying murder spree in New York that Will Piper is called in to solve in 2009.

It takes the reader a while to work out what exactly is going on, but the fact that you manage to do so, or think you do, before all is revealed doesn't spoil things at all. Your self satisfaction is extremely short-lived as the very last page of the book leaves you with your mouth hanging open after an ending you had no idea was coming.

Extremely well-written, imaginative and captivating. The adjectives that could be used to praise this novel only end up sounding cheesy. I am extremely pleased with my timing for picking up this book – the Easter weekend meant that I could read it non-stop until it was done. Not only is Glenn Cooper a gifted and imaginative author, he is currently the CEO of a biotech company in Massachusetts and his accurate 'science speak' is a very welcome breath of fresh air.
Reviewed by Amanda Gillies.

The US edition will be published in July under the title of Secret of the Seventh Son.

You can read more about Glenn Cooper and his book(s) on his website at http://www.glenncooperbooks.com/content/index.asp.

More reviews by Amanda Gillies can be found on the Euro Crime review list page - just use the search function on your browser to find her name.
Posted by Karen (Euro Crime) at 7:30 am

Labels: Glenn Cooper, Library of the Dead, Secret of the Seventh Son

I cannot WAIT to read this!

Do check out Amanda's other reviews as she really likes this sub-genre. I hope you like Library of the Dead :).

The only thing I found that bothered me was that he called Consuela "Maria" for two pages.

It bothered me that the people at the Church forced the girl to "produce" more of Octavus's offspring.

Jose de Madrid, appearing in 800 AD, does not make much sense. At that time, Madrid did not exist, it was just a moorish castle called al-Magrit ("source of water").

Later on in the text, someone identifies a text as being in Portuguese language: funny discovery, since Portugal did not come into existence until the 13th century.

The book is interesting, but with little historical consistency.

The book was complete tosh in so many ways.

Once we find he can smuggle a usb stick up the bottom, and not be traced, in the worlds most secure building both in and outwards.

As for the baby in nine months time - give me a break....