Apologies for the murky photo. I have lightened it up a bit. Click on it for a 'better' look. From left to right, the panel members are:
Ann Cleeves, champion of translated crime fiction (especially Scandinavian), Tiina Nunnally who has translated Karin Fossum and Miss Smilla's Feeling for Snow, Don Bartlett, translator of Jo Nesbo and K O Dahl, Roz Schwarz, co-translator of Dominique Manotti and Reg Keeland (aka Steven T Murray) translator of Stieg Larsson's trilogy and many other Swedish crime novels. 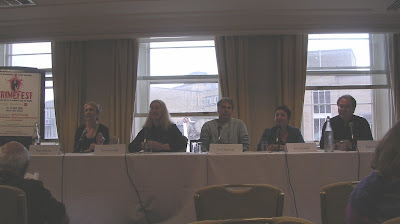 (I hope I convey what was said reasonably accurately. I am paraphrasing but if I've missed anything or misconstrued something, please let me know.)

Firstly, good news for Harry Hole's many fans. The first one in the series The Snowman is to be the next one available in English and we have Don Bartlett to thank for bringing Jo Nesbo to publishers' attention and lobbying for a translation.

The panel were asked whether they ever turned anything work down. Don said possibly if it was too grisly and the panel agreed that they would turn a book down if they had no affinity for the book. Tiina said they didn't really have a lot of choice in what they were given to translate but she might turn it down if there was a child victim. She might lobby for a translation if she spots something. Roz added that she might turn down a piece of work if the deadline was too tight.

Scandinavian crime fiction is very popular in Germany so Reg said that he checked amazon.de to see what was being translated. He contacted Camilla Lackberg's agent directly about translating her books.

The panel were asked whether they read the whole book before translating. Some did and some only read fifty pages before starting. Tiina said that she wanted it to be as much a surprise as when you read it for pleasure. Roz said she read the whole book and then did a draft into English and that's when the work begins. Don said he'd read through the whole book (Devil's Star I think) but then had to work on another book so had to reread it. He said that Jo (Nesbo) has a dry wit like the British and he sees Harry as a dry northerner.

Roz said it was important to keep to the spirit and voice of the original but especially with humour you can't always translate a joke at a certain place in the book so you use another joke a few pages later. Don added that you wonder how much of the original language to leave in eg do you translate the Norwegian police ranks?

Rather than translating from the original language, often the English translations will be used as a basis for a translation into another language eg Albanian.

Don enjoyed translating the novel The Burnt-Out Town of Miracles by Roy Jacobsen and Tiina was fond of the Kristin Lavransdatter trilogy and is currently awaiting the second book from Mikkel Birkegaard. Roz's favourite was The Star of Algiers by Aziz Chouaki and Reg said the Larsson trilogy was the best project he'd worked on. (He translated all three in just ten months.)

Don commented on the out of order translation of the Harry Hole series which began with no. 5 The Devil's Star then went back to no.3 The Redbreast thus ruining the internal arc in books 3 to 5. The Devil's Star had had big sales and that's why it was chosen and technically the books will stand-alone. K O Dahl's books are getting a similar treatment.

As you can see this was a very interesting discussion, well chaired by Ann. Roz is hoping to run a workshop at next year's Crime Fest where the participants will do a bit of translating themselves.
Posted by Karen (Euro Crime) at 12:25 pm

Thank you for a very thorough post about a fascinating theme :)

Very interesting. This is the panel I most regret having missed.