I mentioned the French comedy-spy film OSS 117: Cario, Nest of Spies last year when it had a limited release in UK cinemas. It was released on R1 DVD last September and is now available on R2 DVD and costs around 8 pounds online. 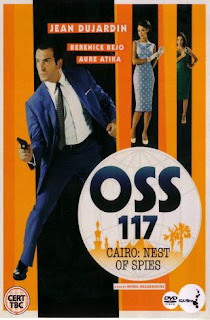 A box-office sensation in France, comic star Jean Dujardin stars as secret agent Hubert Bonisseur de la Bath, aka OSS 117 who in the tradition of Maxwell Smart and Inspector Clouseau somehow succeeds in spite of his ineptitude.

After a fellow agent and close friend is murdered, Hubert is ordered to take his place at the head of a poultry firm in Cairo. This is to be his cover while he investigates Jack's death, monitors the Suez Canal, checks up on the Brits and Soviets, burnishes France's reputation, quells a fundamentalist rebellion and brokers peace in the Middle East.

A blithe and witty send-up not only of spy films of that era and the suave secret agent figure but also neo-colonialism, ethnocentrism and the very idea of Western covert action in the Middle East.

The Metro review is here and it mentions a follow-up: OSS 117: Rio Isn't Answering Any More.
Posted by Karen (Euro Crime) at 11:44 am