Several books recently have used the 'International Exhibition of Paris of 1889' as a backdrop to or integral part of their stories: Murder on the Eiffel Tower by Claude Izner, The Paris Enigma by Pablo de Santis and now the debut novel from Carol McCleary, The Alchemy of Murder which is to be published by Hodder on 2 April. (It's a large book but thankfully for those of us with ageing eyes, the print is huge). 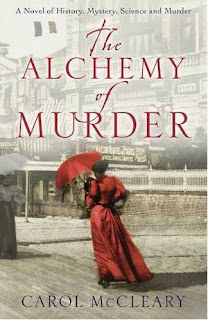 The Alchemist is how I’ve come to think of him; he has a passion for the dark side of knowledge, mixing murder and madness with science

Nellie Bly – reporter, feminist and amateur detective – is in Paris on the trail of an enigmatic killer.

The city is a dangerous place: an epidemic of Black Fever rages, anarchists plot to overthrow the government and a murderer preys on the prostitutes who haunt the streets of Montmartre. But it is also a city of culture, a magnet for artists and men of science and letters. Can the combined genius of Oscar Wilde, Jules Verne and Louis Pasteur help Nellie prove a match for Jack the Ripper?

I'm sure there must be more novels set during this exhibition...

Of course if it's Oscar Wilde as sleuth you're after then head on over to Gyles Brandreth's series.
Posted by Karen (Euro Crime) at 10:12 pm