The Danish film Flame & Citron was released here in the UK on 6 March. Not many cinemas will have it, so a wait for the DVD is probably in order.

Jonathan Ross reviewed it with high praise on the last edition of Film 2009. This can be watched via iplayer for 7 more days here. Flame & Citron is covered at about 22 minutes in. 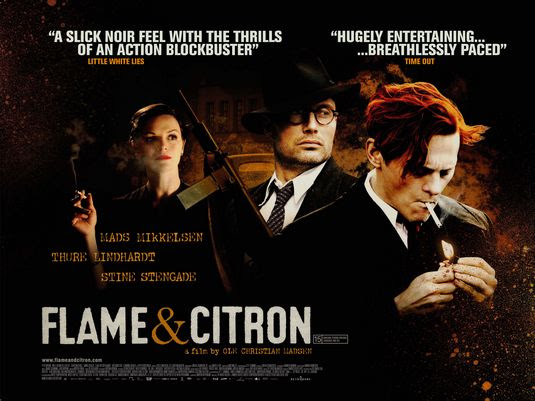 Copenhagen 1944. While the Danish population hopes for a swift end to the war, freedom fighters Bent Faurschou-Hviid (23), a.k.a. Flame and Jorgen Haagen Schmith (33), a.k.a. Citron, secretly put their lives at stake fighting for the Holger Danske resistance group.

The fearless and uncompromising Flame is a confirmed anti-fascist and dreams of the day when the group will assemble and openly launch an armed counterattack at the occupying power. The more sensitive family man, Citron, used to work primarily as a driver for Flame, but now finds himself becoming more deeply involved in the group's work.

When their immediate superior, Aksel Winther, orders them into action against two German Abwehr officers, events start to get out of hand. Flame engages in conversation with the talented and intelligent Colonel Gilbert and for first time, Flame calls the soundness of the order he is about to execute into question. Something feels terribly wrong.

Furthermore, when suspicion turns to his girlfriend, the beautiful and mysterious courier, Ketty, Flame begins to spot the outline of a different and mostly hidden agenda. Can Ketty be trusted? Can Winther? And who really works for whom? While their doubts gnaw at them, Flame and Citron come to feel that they are on shaky ground. Desperate, disillusioned and with a sense of having been betrayed by their superiors, they decide only to trust each other and concentrate their efforts on getting to the much hated and feared chief of the Gestapo, Hoffmann.

The film is based on actual events and eyewitness accounts from some of the people who experienced Bent Faurschou-Hviid ("Flame") and Jorgen Haagen Schmith ("Citron") at very close range.

Am seeing this later in the week (it's just opened here in Edinburgh), so will report back soon. I'm something of a Mads Mikelsson fan, so I'm not entirely sure how objective I can be...hopefully the professional historian bit will stay awake!

I will have to wait till next month to see this as a birthday treat.

I doubt it will get to Kingston, so looking forward to your report, Lauren. Thanks for the heads up, Karen.

I've now seen it. Not a proper report, but a few general thoughts.

1) Don't do as I did and see the film alone at a late evening session. The long walk home feeling like I'd been kicked in the stomach by the ending was really quite horrible!

2) The acting from the two leads is superb - much of the film is essentially a two-hander and there's not all that much dialogue, so this makes a huge difference.

3) I'd heard compaints both about the length and that it wasn't particularly cinematic. Well, I'm not sure the topic really lends itself to grand vistas, and the most 'stylish' scenes are in many cases the least convincing. It certainly worked for me. As for length...at 2hr14 it's long but that's no longer than most other recent releases, and shorter than many. Maybe there's a few sequences in the middle that dragged a bit, but the opening and particularly closing scenes are brilliant. Definitely worth putting up with te sprall.

4) In many ways it's a really Danish film, despite the glamorous trappings - the voiceover is really direct at the start, and there's few concessons to the historically clueless. However, it comes together in an interesting way that draws wider conclusions, I think.

5) Tastes may differ, but I think it was very cleverly done. Just about every cliche/standard idea from war and resistance films is present, but they're turned on their head so many times the end result is very interesting.

6) I felt it raised quite a few ethical questions missing from other recent films about Resistance movements. (ie Valkyrie and Defiance, and to some extent Black Book, which to my mind was a bit too glamorous.) I don't know if the gloomy camerawork was supposed to be making a moral popint, but it certainly seemed like it.

7) Subtitles a bit clunky in places, but seemed to work well enough. (I can understand bits of Danish if I concentrate hard enough, so I think that's why it was irritating for me.)

8) Citron refers to Citroen, not lemon.

Overall, highly recommended. Grim but extremely stylish, it's not hyper-realistic but makes its point all the better for it.

(Er, clearly brevity is not my strong point!)

This is why I shouldn't post in a hurry.

Re 8) Citron *is* lemon, but it's based on the fact that the real person worked for Citroen.

Oh, and I just found a review complaining that both actors had cheekbones which would be more at home on the pages of Vogue Homme. I fail to see why this is a problem...

Many thanks Lauren for your observations. I'm certainly keen to see this though I'll probably have to wait until the DVD, despite living near Birmingham.

Flame (?) reminds me of an American actor in his earlier days - Eric Stoltz.