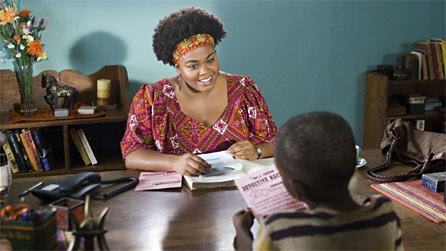 She's back! Mma Ramotswe, Botswana's no1 lady detective will be back on tv screens here and abroad shortly. In the UK the new series begins on Sunday 15th March at 9pm. The first of six episodes; read about episode 1, The Big Bonanza on the BBC website. The pilot episode is being repeated on BBC4 on Saturday at 7.15pm

The same pilot is being shown in the US on HBO on the 29th March at 8pm.

An article in the new TV & Satellite Week magazine (no on-line link available) concludes: "With her first child due to be born next month, Scott is unsure whether she will return to the role of Precious for a second series 'A lot of things will determine what happens next. But I'd definitely like to be able to figure something out'."
Posted by Karen (Euro Crime) at 11:20 am

I was bedridden after a hospital stay - compressed discs, pinched nerves, the whole agonizing bit. While at my daughter's home,I was introduced to the No. 1 Ladies Detective Agency. What bliss! What comfort and laughter! How warm and joyous - how different from the usual stuff! Thank you.