We've had Maigret, the Swedish Wallander and now Montalbano, based on Andrea Camilleri's books, which is being shown on BBC4 next weekend:

On Saturday 13 Dec at 10pm, Excursion to Tindari: 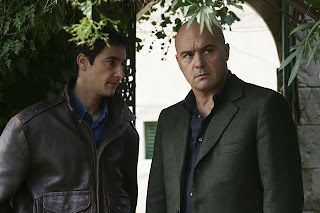 Drama based on the series of books featuring the Sicilian detective, Inspector Montalbano. A young Don Juan is found murdered in front of his apartment building and an elderly couple are reported missing after an excursion to the ancient site of Tindari.

They seem two unrelated cases for Inspector Montalbano, but when he discovers that the couple and the man lived in the same building his investigation stumbles on to Sicily's brutal 'New Mafia', which leads him down a path full of evil.

Montalbano's Croquettes: When the chairman of a public works company and his young wife are found dead in their car in a ditch, the immediate conclusion is an accident. However, the fact that the woman's fingernails are broken leads Montalbano to suspect that things are not as they seem and that they have been murdered.
Posted by Karen (Euro Crime) at 1:48 pm

I was just finishing a post about all these French and Swedish crime fiction programs when I checked my link back to Euro Crime and saw this news.
TV of Dreams!

Sounds great, thanks for the heads-up. I hope to be able to watch this.

The Montalbano programmes are really excellent - well worth a look!

My DVD recorder is programmed already :).

These two films have been among the best tv policiers I've ever seen. Fast, funny, satisfying as mysteries and superbly acted, they are models of how such stories should be made. In particular (BBC 1 please note) they are shot in exactly the right style: no arty angles, obscurantist lighting, or lingering shots of characters racked with angst or possibly indigestion posing against panoramic sunsets - shots whose only purpose is to reassure the owners of HD sets that they haven't wasted their money.
So mucho thanks to BBC 4, and can we now see the other fifteen or sixteen shows in the Montalbano series!

You blog is very fine and inspiring. Thanks for sharing your knowledge with us.

Montalbano has it over anything else - actual complicated plots. humour and our hero always does something decent - and it helps my Italian - ciao!