The Guardian's article in July, Crime fiction: Around the world in 80 sleuths, had this to say about Antarctica:

The North Pole has Ice Station Zebra and The Thing. Antarctica has Greg Rucka's graphic novel about US Marshall Carrie Stetko, out solving murders in the most desolate continent on earth.

I've just received a proof of Robert Masello's Blood and Ice (US Feb 09, UK Mar 09) which spans time, genre and locations but seems to include a significant chunk of time/plot in Antarctica: 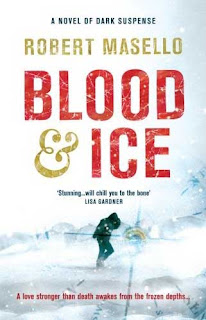 Troubled journalist Michael Wilde takes on a commission to write a feature about a remote research station deep in the frozen beauty of Antarctica. On a diving expedition in the polar sea he discovers two bodies encased in ice. The pair, a man and a woman chained together, their dress from the nineteenth-century, are brought to the surface - along with a trunk containing a strange, but sinister cargo. As the ice around them begins to thaw, the mystery of these time-bound lovers begins to unravel.Michael is gradually drawn into a horrific story that starts in the London barracks in the 1850s and leads to the bloody battlefields of the Crimea and the tragic Charge of the Light Brigade. Now, in the Antarctic wastes, the Cavalry officer and his lover are reawakened into a world where the midnight sun lasts for months, where there's nowhere to hide and no place left for the living to run...In this chilling supernatural thriller, spanning five continents and several centuries, Robert Masello weaves together an extraordinary tale of eternal life and undying love. Gripping and intensely moving, "Blood and Ice" will take its readers on an enthralling, and unforgettable journey.

Anyone know of any other titles set in Antarctica?
Posted by Karen (Euro Crime) at 8:08 pm

I cheated, and looked in the CD-ROM version of Hubin's Crime Fiction IV:

Thanks Stan. Quite a few then! I've got that CD as well, never thought to have a look!!

An impressive list. Yet, oddly, none of them published by Penguin!!

Amazing list. There are a couple of Alistair MacLeans set in somewhere very cold - Ice Station Zebra and a better (but not so well-known) one about a convoy. Whether Antarctica or Arctic, I can't remember.

The book sounds good though- tempting!

I've got lots of polar genre fiction, including crime fiction, on my website:
http://www.phys.barnard.edu/~kay/polar/

Albert Sanchez Piñol, Cold Skin may qualify as well as a crime novel set in Antarctia. More information can be found in this link:
http://www.complete-review.com/reviews/espana/spinola.htm

Many thanks for the additional suggestions.