The Unexpected Guest on tour in the UK

Agatha Christie's, The Unexpected Guest, starring Simon MacCorkindale, is currently touring the UK. The full list of dates and venues is here. 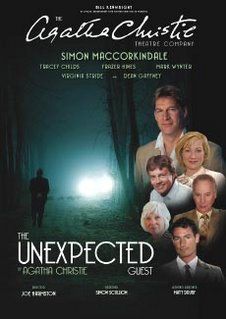 "Following widespread critical acclaim for their star-studded production of The Hollow, the second production from The Agatha Christie Theatre Company promises to be another “beautifully staged and executed murder-mystery... a killer production of classic Christie class” (The Argus).

Lost in the fog on a lonely road, a stranger seeks refuge in a nearby house, only to find that he has stumbled onto the scene of a murder! When the dead man’s wife confesses to killing her much despised husband, the stranger agrees to provide her with an alibi. But, who is he really protecting? And, in a house full of suspects, whose are the unidentified fingerprints found at the scene?

Credited as one of Agatha Christie’s most mischievous and chilling whodunnits, The Unexpected Guest is filled with all the suspense, intrigue and surprise twists that make Christie one of the world’s best-loved authors and the undisputed first lady of crime."

If you can't make the play, Charles Osbourne wrote it up as a novel in 1999 and it is available most recently as a 2003 paperback.
Posted by Karen (Euro Crime) at 8:54 am