I'm 70 pages or so into 'The Arsenic Labyrinth' by Martin Edwards. This is the third of his marvellous Lake District mysteries following on from The Coffin Trail and The Cipher Garden. This series features historian Daniel Kind and head of the cold case review team, Hannah Scarlett. Both currently have partners but it seems inevitable that eventually they'll end up together. As well as strong plots these books have a great sense of place which makes me want to explore the Lakes much more than I have so far. 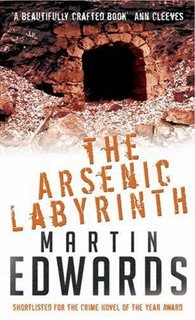 Synopsis from amazon.co.uk:
'You'd never believe it to look at me now, but once upon a time I killed a man.' Daniel Kind is finding the long winter months at Brackdale tough, especially as his relationship with Miranda is also going through a dark time. Far from the bright lights of London and beginning to feel isolated in their rural idyll, Miranda has a bad case of itchy feet. The fear that she may just get up and leave isn't far from his thoughts. And Miranda wouldn't be the first: ten years ago a solitary woman called Emma Bestwick left her cottage and never came back. Police at the time were unable to establish whether she left of her own accord or was the victim of suicide, accident or murder. Her disappearance went unaccounted for, and the unresolved case has always irked DCI Hannah Scarlett, who heads the local Cold Case Review Team. But in a small, rural community, someone is bound to know something. And that someone has recently started calling the local newspaper and dropping hints about Emma's death. With the case reopened, Hannah and Daniel are drawn together again, and discover to their cost that one person will preserve the secrets of the past at any price.

The US edition by Poisoned Press came out in January whereas the UK edition by Allison & Busby is out on the 15th.

Over on The Rap Sheet Ali has a lengthy post on Martin Edwards and lawyers and it being a small world!
Posted by Karen (Euro Crime) at 10:08 am