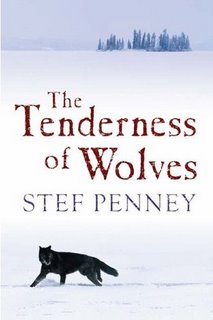 An unknown British writer shook the book world last night, winning the first £30,000 Costa Book of the Year Award (for 35 years it was the Whitbread Award) for her debut novel about Canada - despite a severe medical condition that made it impossible for her to go there.

Stef Penney’s portrait of a small Canadian settlement in deep midwinter was so authentic that when her winning novel, The Tenderness of Wolves, was published in north America, Canadians were convinced that she had spent weeks researching the book there.

In fact, the author who lives in east London, did all her research at the British Library. Acute agoraphobia meant that she could not travel by aeroplane or train for 15 years.

The Tenderness of Wolves is a murder mystery that takes place in 1967 on Dove River, a lonely snowbound town on the Hudson Bay.

For some reason I had either not considered the author Euro or the subject crime. It's been remedied now and Stef Penney will appear on the next upload to the website.
Posted by Karen (Euro Crime) at 3:51 pm

What an interesting story. I don't think I've heard of this book or the author. I must read it someday, it sounds good.

I've put a reservation at the library on the paperback which is due out in March. I love the cover.