I know it's common in Hollywood to pitch a new film as X meets Y but it's not that common in books (or is it?) so I was amused to see the blurb for 'Blood Ties' by Sam Hayes which is out in April: 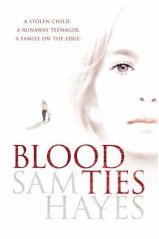 From amazon.co.uk: "Jodi Picoult meets Martina Cole in this shocking, gritty novel from a stunning new British voice A mother searches frantically for her missing baby. A few streets away, a teenager gives birth in her bedroom, frightened and alone. Thirteen years later, Robert Knight, a solicitor, wonders why his new wife is so cagey about her past, and so strangely protective of her thirteen-year-old daughter. Three separate lives, bound by one shocking secret. The past is about to catch up with the present..."

I believe Picoult is more at the literary end of popular fiction and her novels are set in America whereas Cole writes gritty, down to earth East End crime novels, based on experience. Interesting hybrid!
Posted by Karen (Euro Crime) at 10:27 am

I would say, based on the one I read, that Picoult is more of the soap opera/melodrama end of fiction. I ran out of books on holiday last year and so read one of Cathy's --she has read the entire Picoult ouevre. I won't be reading any more than the one I sampled.