The Dictator and the Hammock by Daniel Pennac 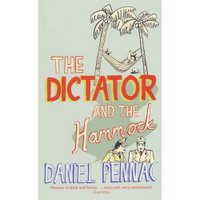 Continuing the French connection...'The Dictator and the Hammock' by Daniel Pennac was released today (according to amazon.co.uk). It's not obvious that this one's a crime novel, unlike the other books that have been translated, but it looks fun anyway.

"Manuel Pereira da Ponte Martins, beloved dictator of Teresina, in the Brazilian sertao, becomes agoraphobic the day a fortune-teller predicts he will die torn to pieces by an angry mob. From then on, his life turns out to be so unbearable that he decides to hire a double to replace him while he will be enjoying himself in Europe. A few years later, the barber turned dictator also grows tired of running the country and uses the same trick as his predecessor to leave for Hollywood. On the boat there, he introduces himself as Charlie Chaplin but everyone is convinced that he is none other than Rudolph Valentino disguised as Chaplin. When he arrives in New York, the two real actors are waiting for him...Back in Teresina, the doubles follow one another, easily fooling the people until Pereira comes back. He is astonished to discover that his stand-in doesn't look like him at all and reacts in a way that can only precipitate his meeting with Fate. Pennac's new novel is witty, wildly original and extremely funny." (from amazon.co.uk)

Pennac is great fun. Have you read his book on reading Better than Life?

Hi Lee, no I haven't come across it but I'll certainly try and seek it out. Thanks for the recommedation.