Here are some British traditional mysteries published this year, that I'm looking forward to reading. The first two are historicals and the last two are modern day and all are first in series (though I'm not sure if A Dangerous Crossing is actually a standalone.). 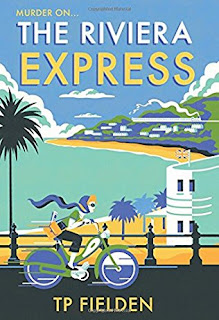 The Riviera Express by TP Fielden published in February 2017 by HQ.

Gerald Hennessey – silver screen star and much-loved heart-throb – never quite makes it to Temple Regis, the quaint Devonshire seaside town on the English Riviera. Murdered on the 4.30 from Paddington, the loss of this great man throws Temple Regis’ community into disarray.

Not least Miss Judy Dimont –corkscrew-haired reporter for the local rag, The Riviera Express. Investigating Gerald’s death, she’s soon called to the scene of a second murder, and, setting off on her trusty moped, Herbert, finds Arthur Shrimsley in an apparent suicide on the clifftops above the town beach.

Miss Dimont must prevail – for why was a man like Gerald coming to Temple Regis anyway? What is the connection between him and Arthur? And just how will she get any answers whilst under the watchful and mocking eyes of her infamously cantankerous Editor, Rudyard Rhys? 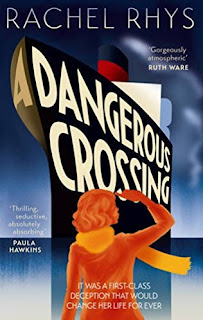 A Dangerous Crossing by (Tamar/Tammy Cohen writing as) Rachel Rhys, published in March 2017 by Doubleday.

1939, Europe on the brink of war. Lily Shepherd leaves England on an ocean liner for Australia, escaping her life of drudgery for new horizons. She is instantly seduced by the world onboard: cocktails, black-tie balls and beautiful sunsets. Suddenly, Lily finds herself mingling with people who would otherwise never give her the time of day.

But soon she realizes her glamorous new friends are not what they seem. The rich and hedonistic Max and Eliza Campbell, mysterious and flirtatious Edward, and fascist George are all running away from tragedy and scandal even greater than her own.

By the time the ship docks, two passengers are dead, war has been declared, and life will never be the same again. 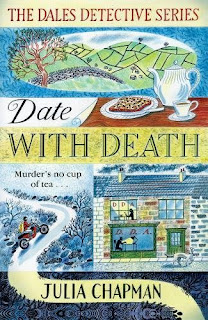 Date with Death by (Julia Stagg writing as) Julia Chapman, also published in March, by Pan.

Samson O'Brien has been dismissed from the police force, and returns to his hometown of Bruncliffe in the Yorkshire Dales to set up the Dales Detective Agency while he fights to clear his name. However, the people of Bruncliffe aren't that welcoming to a man they see as trouble.

Delilah Metcalfe, meanwhile, is struggling to keep her business, the Dales Dating Agency, afloat - as well as trying to control her wayward Weimaraner dog, Tolpuddle. Then when Samson gets his first case, investigating the supposed suicide of a local man, things take an unexpected turn, and soon he discovers a trail of deaths that lead back to the door of Delilah's agency.

With suspicion hanging over someone they both care for, the two feuding neighbours soon realize that they need to work together to solve the mystery of the dating deaths. But working together is easier said than done . . . 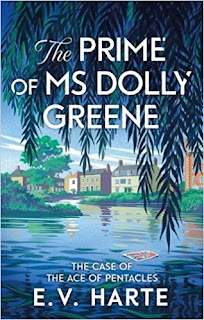 The Prime of Ms Dolly Greene by (Daisy Waugh) writing as E V Harte publishing in September by Constable.

In the heart of South West London, just a short stroll from the Thames, lies an enclosed and overgrown bike path and a single row of cottages. Its name is Tinderbox Lane. Foremost among the Lane's hotpotch of loyal residents is professional Tarot reader, Dolly Greene: divorced and permanently broke, she shares her tiny house with her 21-year-old daughter Pippa.

When, one stiflingly hot summer's day, Dolly reads the cards for the voluptuous and highly-sexed Nikki, her usually professional patter is interrupted by a sudden vision - a flash of Nikki's face, covered in blood and bruises. Death hangs over the magnificent Nikki - but there is an etiquette to reading Tarot and Dolly will not talk of murder to her client.

A few days later when the body of a battered woman is washed up by Chiswick Bridge, Dolly is haunted by the belief that Nikki's time may have come. . . but can she be sure? How far is Dolly prepared to go to act on her intuition? And will Sergeant Raff Williams, the officer assigned to investigate the murder, think Dolly's hunch insane?
Posted by Karen (Euro Crime) at 9:00 am