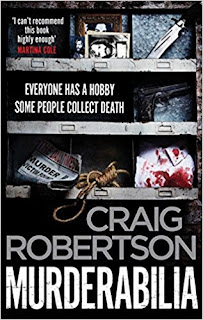 Another corker from Craig Robertson and covering a topic that is gruesome to say the very least. The central theme of the novel hovers around the unsavoury habit of collecting artifacts from murders – pieces of clothing, jewellery, hair, weapons. Even bricks from houses where murders took place. The list goes on and the prices paid can be astronomical. Robertson admits to having looked into this murky world as part of the research for his book. It is impossible to imagine what he found or, indeed, why people want to collect such things.

MURDERABILIA continues Robertson’s series featuring crime photographer Tony Winter and his detective girlfriend Rachel Narey. Tony lost his job with the police in the last book and is now trying his hand at journalism. Getting a lead for a good story is not proving to be particularly successful for him and he doesn’t feel cut out for the job. But then, one morning, a body suspended from a bridge in Glasgow city centre shocks the early commuters and the whole city finds itself reeling. The deceased is the son of a high profile politician and Tony’s photograph of the pile of clothes left neatly folded beneath the body proves to be an instant media hit. Narey, now pregnant, is removed from the case and, much to her disgust, made to endure forced bed rest after collapsing at work. She must stay calm at all costs to keep her baby safe but staying out of things proves to be too difficult for her – especially with her nemesis Denny Kelbie brought in to save the day.

Close scrutiny of Tony’s photo soon reveals that not everything is as it should be. Key pieces of clothing are missing from the pile and pretty soon they appear for sale on a somewhat dodgy website. Armed with her laptop and going out of her mind with boredom, Rachel starts to dig and is soon out of her depth in the Dark Web, shocked at what she finds. She sends Tony to do her investigating and both of them are soon caught up in a world where murder is a collectible art and people seem to be willing to pay very high prices for their coveted prize. Rachel, drawn in by the irresistible lure of the objects she finds, is soon buying murderabilia. But her questions have been noticed and it is not long before somebody is watching her closely as well. Can she and Tony solve the case before it is too late or will her fate end up being the same as that of Sharon Tate, who was infamously murdered when pregnant, and is now haunting her dreams?

An absorbing and engrossing book, this is one of Craig Robertson’s finest works. It has so many twists and turns that you must stay on your toes to keep up but the ever-increasing pace, that winds up slowly then reaches a screaming crescendo, will keep you up at night to find out what happens. I have read all of Craig Robertson’s books and am always delighted to be asked to review another one. He is a talented wordsmith and I am enjoying watching him develop his craft.