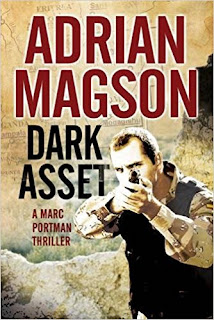 This author never ceases to amaze me with the high quality of his writing even though he is currently researching and preparing two main series of books. There is this series with Marc Portman and also the 'Cruxys Solutions Investigations' series the last one named THE BID which was published in paperback in February 2017.

Marc Portman's latest assignment is providing back-up for a French intelligence agent sent to recover a hard drive from one of the most dangerous cities on the planet: Mogadishu in Somalia. What he hasn't been told is that the device records secret negotiations between two leading western nations and a hard-line terrorist organisation responsible for killing thousands of innocent people.

When the decision is taken to abandon the talks, anybody in the know immediately becomes a target to be silenced.

And Portman finds himself at the top of the list...

This book was non-stop action and suspense. Portman has to go into the centre of this highly dangerous city to meet a French agent who is supposed to have a hard drive with highly dangerous data on it. Unfortunately, the rendezvous building he goes to is under siege by very unfriendly people and Portman finds the agent but he has been shot and killed.....

It is a book that once started it is almost impossible to put down and I was up until quite late at night before I finally reached the very gripping conclusion.

The main attraction I have in reading this author's work is that the stories are completely unpredictable, in the middle of this one I remember thinking - what is going to happen next? And having no idea at all except that whatever it is will be highly imaginative and take the story in a fresh direction entirely.

This very exciting and sensationally well plotted creation rushes on to its final dramatic conclusion. I have had the privilege of reviewing many of this author's books and I hope to read yet more of this very gifted author's stories, whether it is in this new series or any of the previous ones or completely in a new direction soon. If you want to start reading an exciting book that is exceedingly difficult to put down once started then buy this one. Very strongly recommended.