Reading Group thoughts on The Theory of Death 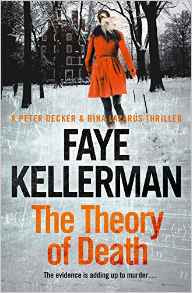 It’s been almost a year since Greenbury’s last murder. Detective Peter Decker has been enjoying the slower pace of life in upstate New York … until two kids find a dead body in the woods.

Identifying the body takes Decker and his former partner Tyler McAdams into the cryptic world of mathematics at Kneed Loft College – a sphere of scheming academics, a beguiling student who sets her sights on McAdams, and a dangerous underworld.

It will take all of Decker’s wits and McAdams’s intellect to solve a twisted tale created by depraved masterminds, and then make it out alive…

A while back my F2F reading group won copies from the publisher,  of The Theory of Death by Faye Kellerman.

I enjoyed the book and found it an easy read and rather wish I'd read the previous book in the series which (I think) introduced Decker's (annoying) young partner McAdams.

Verbal comments from the group included:

Got bored with the maths.

[the student] was very irritating - what was Faye Kellerman thinking?

and a handed in written review: Readable, formulaic, overlong. Flagged at times. Characters likeable enough but had no depth. Ending a little disappointing and predictable.

So a mixed response but overall the response was positive.

I'd like to thank the publisher (HarperCollins) for the books and thus the opportunity for the group to all read the same book. Usually, as we're library based, we have to go with a selection of titles to have enough copies to go round.