Review: The House With No Rooms by Lesley Thomson 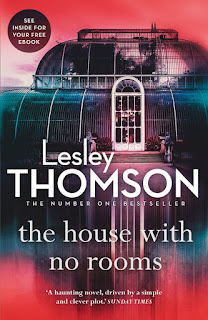 In the baking hot summer of 1976 a young girl, Chrissie, is reluctantly having botanical art lessons with Mr Watson who works at Kew Gardens. The lessons have been arranged by her father, a taxi driver, who wants her to have the best chances in life. He enrols her in a private school where she meets new friends, Bella and Emily, and as she tries to equal their backgrounds and lifestyles, she soon finds her stories are growing out of control and pretends that Mr and Mrs Watson are her parents and that she lives in their big house. One day as she waits for her friends, she sees a woman being murdered, but the body disappears.

In November 2014, Stella Darnell owns a very successful cleaning company which has just won the contract to clean at Kew Gardens. Before his death, her father was a senior police detective and Stella and her close friend Jack, have had some success in solving mysteries in their spare time. Jack is a train driver, as well as working as a cleaner for Stella's company. He is also jealous of Detective Superintendent Cashman's close connection with Stella. Cashman was a friend of Stella's father and feels that it is his duty to look after her. Early one morning when cleaning one of the galleries at Kew on her own, Stella finds the body of a man.

The two strands of the story, 1976 and 2014 are told side by side. For most of the book, I felt as if I was reading two separate stories and found the experience annoying. I think that if an author adopts this sort of device then they need to ensure that some of the connections are clear enough to pick up, otherwise it is easy for the reader to lose track of the various strands. For me, the book only came alive, when I started to recognise and understand the connections between the characters and this was quite late in the story. I haven't read this author before, but I will be reading another since I did like the characters and this encourages me to give the author another chance.