Review: The Body on the Doorstep by A J Mackenzie 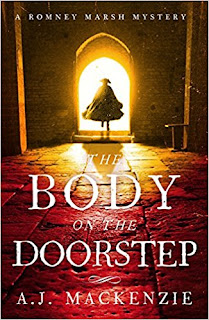 The year is 1796. It is midnight on Romney Marsh, Kent, on England's south-east coast in the darkness of a new moon. Smugglers’ boats bring their illicit cargoes of brandy and tobacco from France to land on the beaches of the Channel coast. Suddenly, shots ring out in the night. The rector of St Mary in the Marsh, the Reverend Hardcastle opens his front door to find a young man dying on his doorstep and is lucky to avoid another shot himself.

What do those four words mean? Who is the young man? Where did he come from, and who killed him? Why, five minutes later, was a Customs officer shot and killed out on the Marsh? And who are the mysterious group of smugglers known as the 'Twelve Apostles', and where does their allegiance lie? When the rector investigates, aided by his faithful allies:- Mrs Amelia Chaytor, a local widow, and the young painter William Turner, he quickly finds himself involved in a world of smuggling, espionage...and danger.

This book was absolutely gripping in the historical details which were really fascinating and the one thing I was absolutely amazed about was the huge volume of alcohol that was consumed by the Reverend Hardcastle. He often drank a pint of claret with his breakfast and was sipping port or brandy all day long and getting through several bottles each day!! The joint authors say that people in the eighteenth-century drank, and not tea and coffee, but very large volumes of alcohol. They really drank. Not just trebles all round; beer for breakfast was not unusual among the lower orders, while those who could afford it might start the day with a tankard of claret, or even port. And throughout the remainder of the day, alcohol was consumed in vast quantities at all levels of society.

This was a really exciting and truly atmospheric historical mystery that had me transfixed from page one until the final conclusion. The plot was hugely imaginative and the characters were very believable. Whilst the rector and Mrs Chaynor investigate all the various clues to the mystery that they unearth, the plot twists one way and then goes off in another direction and the reader has no alternative but to read on and I just did not want this book to conclude but unfortunately it did and I only am comforted by the fact that further books are promised by these very talented new authors.

Because of the time that the story was set in when there were great worries that the French might invade and the modern appliances that we take for granted such as the internet, DNA, newspapers, TV and other modern conveniences were refreshingly absent at that time solving a crime was particularly difficult and word of mouth was extremely important. So the Reverend Hardcastle and his allies had great difficulty in their investigations and this made the story so much more interesting. I look forward to reading many more books in the future by this very exciting author.