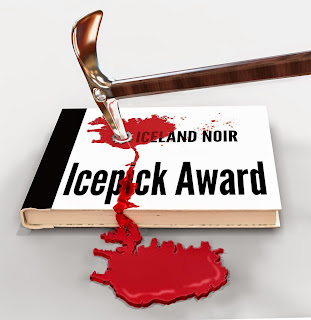 Quentin Bates, author of the Iceland-set Gunnhildur series, is one of the judges for the new crime fiction award, the Icepick, and has sent me the following press release:

The authors and Icelandic translators of the following five novels are shortlisted for the inaugural Icepick Award – the Iceland Noir Award for translated crime fiction.

The award is founded by the Reykjavik Crime Festival Iceland Noir, The Icelandic Association of Translators and Interpreters and The Icelandic Crime Writing Association. The Icepick will be awarded for the first time at the Nordic House in Reykjavik on 22 November 2014.

The Icepick shortlist is announced on the date of birth of Raymond Chandler, who used an icepick as a murder weapon in his 1949 novel, The Little Sister.

The jury for the award is composed of Magnea J. Matthíasdóttir, Chairman of The Icelandic Association of Translators and Interpreters, Katrín Jakobsdóttir, Member of Parliament and former Minister of Culture and Education, journalist and literary critic Kolbrún Bergþórsdóttir, and crime writers Quentin Bates and Ragnar Jónasson.

The judging panel commented that Veljeni vartija [My Brother’s Keeper] by Antti Tuomainen and translated by Sigurður Karlsson is a very well written crime noir from Finland. The author’s strong and sharp style is impressive and memorable, and is delivered well in translation.

Panserhjerte [The Leopard] by Jo Nesbø, translated by Bjarni Gunnarsson, is a terrific crime novel from the Norwegian grandmaster, well translated; the eighth Harry Hole novel and one of the best in the series.

Gone Girl by Gillian Flynn, translated by Bjarni Jónsson, is seen as a brilliant and exciting thriller, fluently translated; an unusual and surprising storyline, with a wonderful plot twist.

The panel found Människa utan hund by Håkan Nesser, translated by Ævar Örn Jósepsson, to be a first class family drama in the form of a crime novel, driven by strong characters; impressively translated.

In La Vérité sur l'affaire Harry Quebert [The Truth About the Harry Quebert Affair] by Joël Dicker, translated by Friðrik Rafnsson an unusual hero gets caught up in a murder mystery full of surprises, keeping the reader’s attention for 700 pages; a cleverly constructed book, and a very fine translation.

ICELAND NOIR – Reykjavik International Crime Festival will take place, for the second time, the weekend of November 20 – 23, 2014. Around thirty authors, from all around the world, will take part in panels and interviews. Featured authors 2014 are Peter James, Johan Theorin, Vidar Sundstøl and David Hewson. The festival is open to all fans of crime fiction. For registration information please visit icelandnoir.com.