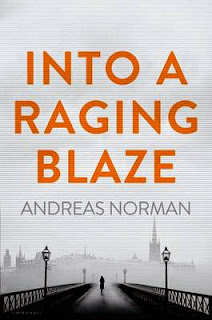 INTO A RAGING BLAZE is former Swedish Ministry of Foreign Affairs employee Andreas Norman's first novel and it is a detailed and absorbing look at the modern-day world of surveillance and government intelligence gathering.

Carina Dymek is a dedicated worker at the Swedish Ministry of Foreign Affairs. She has worked her way up and is hoping for a promotion shortly. She has a beautiful new boyfriend, Jamal, who works in another government department, and all seems to be going well for her.

At a routine meeting in Brussels, Carina speaks out against what she perceives as racist comments by another country's representatives and when she goes for lunch she is sought out by a man calling himself Jean. He says that Carina has a conscience and hands her a USB stick containing a top secret document about the possible formation of EIS, the European Intelligence Service, which he says needs stopping. Carina reluctantly agrees to take it back and pass the information on, though she is puzzled because she feels that the relevant people must already know about it.

Shortly after Carina disseminates the document, her life changes. Suspended for handling unauthorised documents, she is suspected of being a traitor and her Egyptian-born boyfriend's life is put under the microscope. Carina flees from the security service and knows the only way to clear herself is to find “Jean”. And so a chase begins between the authorities and Carina.

Ironically, Carina's only hope might come from Bente Jensen, the head of the Swedish Security Service (Sapo) unit in Brussels who begins to doubt the terrorist plot that the Swedish and British Secret Services think they have uncovered.

INTO A RAGING BLAZE starts off with a bang with an assassination in Brussels. It then spends some time laying the groundwork of the Ministry, Carina's job and life and her relationship with Jamal. After the USB stick incident the tension slowly builds but the pace is still steady. Carina has help from friends and unwittingly plays into the authorities' hands and it's only when she returns to Brussels later in the book, that the tension really mounts. The espionage plot is quite gripping – the British, especially, don't come out this book too well but nor do the Swedish authorities - but what makes this book fascinating, at least to me, is its apparent authenticity as to how the EU, Security Services and so on works. I particularly enjoyed the sections told from Bente Jenson's point of view – a woman in a top role - and doing it well.