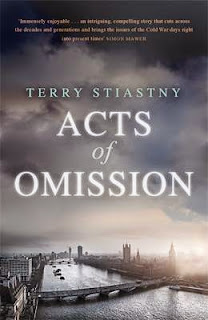 Alex Rutherford is a young civil servant who loses a disk of highly sensitive material when out with some friends. Despite his attempts to recover it, he finally has to admit that he broke all the rules and took the information away from the secure office. He is suspended and investigated for betraying the trust of his office.

Mark Lucas is an MP and the newly appointed Foreign Minister. He believes in transparency in government and when approached by the German government about information concerning former East German informers his instinct is to give it to them, but his colleagues disagree. So when the information finds its way to a newspaper - the same newspaper for which Alex's former university colleague now works – both Alex and Mark are considered as potential security risks. This heightens when Mark’s father, an eminent professor, is named as a former East German informer.

Both Alex and Mark find their lives turned upside down and their careers in doubt as the media storm hits their personal lives and the police and secret services start to question how the disk was obtained by the newspaper and where the breach in security lies.

I am not normally fond of political dramas but enjoyed this one very much. The characters are believable and it is easy to be sympathetic to both Mark and Alex in their attempts to serve their country to the best of their ability. The role of the newspaper and the journalist, Anna Travers, and what she will do to get her story is an unpleasant read and one that is realistic given the recent revelations in to how far the press will go to find the information they want, citing public interest in their quest for the scoop.

This is a first novel written by a former BBC reporter and is based on a true story. It has a decent enough pace, enough for the characters to develop, without the reader feeling they are being rushed on too fast. An author to watch I think.