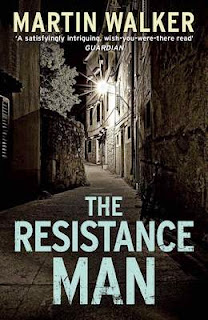 Bruno, chef de police in St Denis, in rural France, is back for another wonderful instalment and, as with his earlier outings, continues to tantalise us with his amazing culinary skills as he searches for the responsible criminal(s). This is the sixth book to feature our French hero, his animals and women friends. Bruno is quite a character and, despite having no shortage of female company, he is still searching for that special someone to share his life and home with. He longs to be surrounded by a family but none of his girlfriends seem to be the settling-down type. In the meantime, he can always cook for his friends – and he frequently does, using fresh ingredients from his garden in a way that teases the reader and leaves you feeling somewhat peckish!

This novel begins with the (natural) death of an elderly man who worked with the resistance during WWII. Bruno arrives to pay his respects and is surprised to discover several old banknotes clutched in the dead man's hands. Closer inspection suggests that the notes may have come from an infamous train robbery that took place during the war and it seems likely that the old man could have been involved with this. While planning the funeral arrangements for this war hero, Bruno has to investigate a series of burglaries that have taken place locally while residents have been away. All of the stolen material is expensive art and Bruno is keen is find the perpetrators, especially as there is also a murder to solve and the two may be linked. As Bruno digs deeper into the crimes, he finds himself digging into his memory regarding a nasty homophobic incident that left him shocked more than ten years previously. He is both surprised and relieved that solving the current happenings might give him closure for that unpleasant cold case as well.

Martin Walker, the author of this successful series is an award-winning journalist and lives in Washington DC. He summers in the Dordogne area, where the series is set, and his familiarity with the region is only too apparent in the deliciously rich descriptions he provides of the locals and their surroundings.

Bruno is a cheery, likeable character, as indeed are his many friends and neighbours. He has a winning way with the ladies and I am hopeful that his friendship with one lady in particular is set to blossom in the future!