Review: Bryant & May and The Bleeding Heart by Christopher Fowler 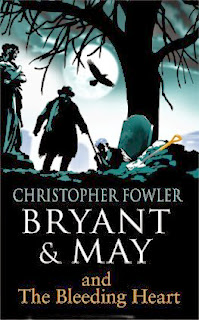 BRYANT & MAY AND THE BLEEDING HEART is the eleventh book about Arthur Bryant, John May and their Peculiar Crimes Unit.

BRYANT & MAY AND THE BLEEDING HEART begins with the Peculiar Crimes Unit having moved from being part of the Metropolitan Police to being part of the City of London Police which brings a new issue for them with a new very sharp and business oriented manager overseeing them. Their first case in their new jurisdiction involves two teenagers who witness a dead man rising from his grave at night in a London park. While the others investigate this, Arthur Bryant is seeking to find out how someone could have stolen all seven ravens from the Tower of London - as legend has it, when the ravens leave, the nation falls.

The dark humour that one expects of a Bryant & May novel is there with perhaps more of a tinge of reality than usual and overall this is yet another strong Bryant & May novel with the expected, very intricate plot with lots of twists, turns and misdirections – remember everything is magic.

Personally I thought this was the best one yet and am waiting for the next one - THE BURNING MAN.

Labels: Bryant and May and the Bleeding Heart, Christopher Fowler, Mark Bailey, Reviews