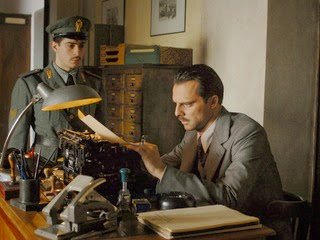 The fourth and final episode of Inspector De Luca is based on the third book in Carlo Lucarelli's De Luca trilogy, Via delle Oche, and is being shown on 12 April at 9pm on BBC Four:


April 1948, and demoted to the role of deputy inspector and assigned to the vice squad, De Luca returns to Bologna. As the first elections of the newly-formed Italian Republic are about to take place, a man is found hanged in a brothel. Although the authorities are quick to pronounce the incident death by suicide, De Luca suspects foul play. His dogged determination provokes a stand-off with his superiors, and the investigation takes a further turn for the personal when the inspector runs into the madam of a brothel located in Via Delle Oche.

For those in the States, MHZ Networks sells this set of dvds.

I look forward to having my questions answered about police under fascist regimes.