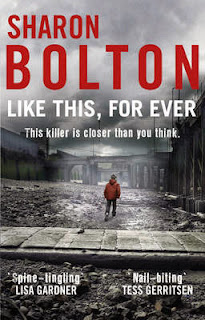 Barney has a secret. He thinks he knows who the murderer is but is too scared to tell. He sees things differently does Barney and while it is useful for finding things he sometimes loses track of time. He doesn't like that. He also misses his mum.

Dead boys are being found beside the Thames, tied up and drained of their blood. Whoever is doing this is speeding up and the pressure is on for DI Dana Tulloch to find the killer as soon as possible. The public is scared and no one is safe outside after dark, although Barney and his friends still do venture out, and end up terrified as a result. Lacey Flint is still on sick leave and determined to resign from the police force once and for all. Except her neighbour, Barney, asks her for help finding his mum and, once drawn in, she can't help but get involved, even when she herself becomes a suspect in the current killings.

This fabulous book is so well written it will draw you in and transport you to another place. You walk down the street with Barney, see what he sees, sit in his room with him and desperately will him to find his mum so that he can be at peace. I had no idea at all who the killer was and the reveal at the end was a fantastic surprise that, then, all made sense. The storyline chapters are interspersed with shorter ones that are the (unknown) killer talking to a psychiatrist at a later date. The tale they tells about why they like blood and what it was like to kill for it, is gruesomely disturbing and written such that you end up suspecting everyone over the course of the book. Everyone except the actual killer, that is!

I love books by Sharon Bolton. She has a real way with words that fills me with dread and keeps me totally focused. This is the third in a series featuring Lacey Flint and I am looking forward to finding out what she does next.

Labels: Amanda Gillies, Like This For Ever, Reviews, S J Bolton, Sharon Bolton