Review: Dog Will Have His Day by Fred Vargas tr. Siân Reynolds 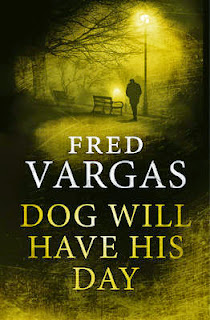 Paquelin leaned over the object more closely. The little thing was gnawed, corroded, pierced with dozens of pinpricks, and slightly brown in colour. He'd seen bones before, but no, this fellow must be having him on.

Paris, 1995
Marthe, who must be about 70 now, is sitting in the café doing a crossword when Louis Kehlweiler comes in. She interrogates Louis at the top of her voice as usual: what’s he doing here – what's he working on – where's the girlfriend? Louis, one-time investigator for the Ministry of Justice tells her, not unkindly, to keep her voice down and, after a drink together, sees her home. He is on his way to one of his many observation posts – “Bench 102”. Here he keeps an eye on the nephew of a far-right politician. And although it is pouring with rain, Kehlweiler knows how to look like a tramp on a bench under a tree. He pulls a disgusted face. Some dog has done his business at the foot of the tree. That's happened since Kehlweiler was last at here at lunch-time.
Next morning, back at the bench, one of his helpers – Vincent – is already in place. Louis asks if Vincent minds if he puts Bufo on the bench; Bufo is Louis' confidante and companion, a pet toad. Vincent has no objection. But he tells Louis that Marthe is homeless, evicted by a landlord keen to redevelop. It was typical of Marthe's pride not to have let on when Louis delivered her to her front door last night. Louis is distracted by a tiny white object under the tree, where the dog had left its calling card. A bone. A human bone. A toe bone in fact.
The Paris police are not interested in the bone. Kehlweiler feels he has no option but to do what he does, which is to investigate. Using his small army of “co-investigators” and street-contacts he keeps watch on the routine evening dog-walkers. He even calls for help from medieval historian Marc Vandoosler, already employed in maintaining the archive of cuttings necessary for Kehlweiler's investigations. When Vandoosler finds no reports of Paris deaths that would tally with the toe bone, Kehlweiler asks him to broaden the search to recent deaths outside Paris. One – an elderly woman who fell and died whilst collecting winkles from rocks in Brittany – tallies with the ownership of a certain dog and draws Kehlweiler and Bufo to the far west.

An unashamed Vargas fan, I've been looking forward to DOG SHALL HAVE HIS DAY. This is not a new Vargas book in fact, but a translation by Vargas's long-time prize-winning translator into English, Siân Reynolds, of the second Three Evangelists book which was published in France in 1996. As such, it re-introduces us to the young archaeologist/historian trio of THE THREE EVANGELISTS and in particular, to the medievalist Marc Vandoosler, clad in black and still searching for chivalric love. But it is the obsessive investigator Louis Kehlweiler, mysterious as to his own past, family and nationality, who is central to this story of a bone, a toe, a corpse and a dog.

If you know the work of four-times CWA International Dagger Award winner, Fred Vargas, you know to expect a crime story of mystery and suspense filled with rich characters and regionality. And although these characters are rich to the point of eccentricity, they still convince. DOG WILL HAVE HIS DAY does not disappoint. An earlier book, it is more of a straightforward "whodunnit" than some of the Adamsberg books. But the Vargas eye and ear for individual character, voice and conversation is all here. She has said in an interview: "I like to use these people from villages. Theirs are the voices that never move and never change." Her innate knowledge of community and character which she depicts with humanity is what make her books a joy. They are deeply “French” – in the tradition of the films of Renoir and Truffaut: life is here, complete with both humour and tragedy, but not painted so dark as to make traumatic reading. DOG WILL HAVE HIS DAY is a well-told intriguing mystery: a story about people's lives, desires and intrigues. So, although there is no Inspector Adamsberg, this is Vargas through and through. Read and savour.

My one word comment on this new/old translation and publication of a book by Fred Vargas: Hurrah!