Review: Death of a Valentine by M C Beaton 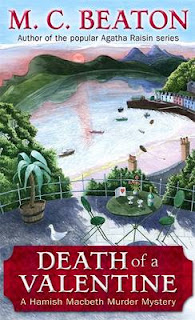 
I've inexplicably got behind with my M C Beaton series, so when the latest Hamish Macbeth book, DEATH OF YESTERDAY, came for review I thought I'd better catch-up. Gone are the days it seems when a Hamish book came in at 160 pages if you were lucky, for DEATH OF A VALENTINE is nearly 300, not that I'm complaining as I love my time in Lochdubh.
The book opens with a shocking prologue – Hamish is standing at the aisle waiting for his bride to be to arrive. After twenty-five books is Hamish about to settle down? Flash back one year and we come in at the start of the events that lead Hamish ready to marry his fellow police-officer, Josie.
Hamish has been promoted again to sergeant which means that he needs a constable and Josie McSween, secretly besotted with Hamish, has got the job and thinks she'll be sharing Hamish's cosy police house in the sea-loch village of Lochdubh. Hamish acts swiftly and gets her alternative accommodation but that doesn't stop Josie from pursuing him, though Hamish remains blissfully unaware.
Hamish and Josie finally have a murder to solve when a local beauty queen is killed by a deadly Valentine's card. It seems that the young woman was not the quiet and retiring girl everyone thought and soon a list of suspects forms. Running alongside the investigation are Josie increasingly desperate attempts to get Hamish to notice her. The usual former girlfriends of Hamish make an appearance – Priscilla (briefly) and Elspeth - fuelling Josie's jealousy.
Though this is a cosy series, set in a fantasy Scotland which you wouldn't confuse with reality, DEATH OF A VALENTINE is quite a dark entry, it includes date-rape drugs and alcoholism as well as the usual infidelity and corruption. The tension comes more from whether Josie will get her man than solving the murder. Indeed the Josie subplot is quite a large part of the book which may explain its (relative) length. Overall, this is a solid entry in this long-running but timeless series, in which no-one gets any older, but it may not be the best place to start.
Posted by Karen (Euro Crime) at 9:00 am