Today's instalment of favourite discoveries of 2011 comes from Michelle Peckham who has chosen a Scandinavian crime tv series, though not The Killing. The series is based on the books by Gunnar Staalesen - and I wrote up a recent interview between him and his translator Don Bartlett: from Norway to Norfolk. 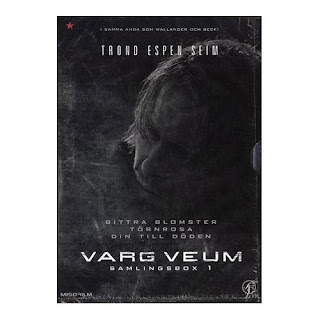 Missing both the dramatisations of Wallander and The Killing on BBC4, and feeling rather bereft, I ordered a 3 DVD set featuring Varg Veum from Amazon (Bitter Flowers / Sleeping Beauty / Yours Until Death). The series is based on the books by Gunnar Staalesen, of which I'd read Yours Until Death, and enjoyed. Unfortunately, not all the books are available in English, so the DVDs were actually a chance to discover more. 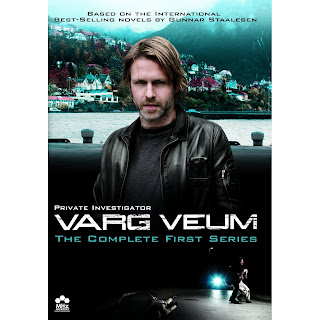 Varg Veum is a private investigator, based in Bergen, a 30ish rakish character, divorced, and attractive. He seems to have a knack for taking on cases that prove difficult, and always seem to bring him into contact with the police. The Norway setting adds to the interest, and these DVDs certainly made up for the lack of Scandinavian crime fiction on BBC4. Thoroughly recommended!

The titles by Gunnar Staalesen which have been translated into English - not many yet alas - are listed and reviewed here.
Posted by Karen (Euro Crime) at 11:41 am

I do like the Gunnar Staalesen books, and agree it is a pity that not more have been translated. I've seen several of the Varg Veum TV programmes and though they are good they don't seem to me quite up to the standard of the books. Still, the leading actor is very handsome and the Bergen scenes are beautifully done, perhaps they are the best part of the series?