Today's instalment of favourite discoveries of 2011 comes from Rich Westwood who chooses a French author, probably not as well known as Fred Vargas but who shares some of her writing DNA.

My discovery of 2011 is the Provençal crime fiction of Pierre Magnan. 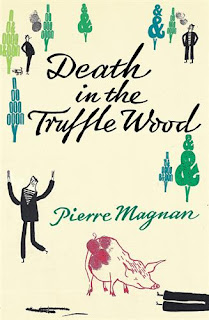 I'm a sucker for an illustrated cover, and the breezy artwork by Nadine James is what first brought Pierre Magnan to my attention in my local library. However, the comedy of the books is darker than the covers might suggest.

The investigator Commissaire Laviolette is an interesting figure, but for me it is the secondary characters who make these books sing. Magnan offers up crusty collection of eccentrics, thoroughly doused in red wine, reeking of Gitaines and strange local cheeses, all closeted in cramped little Provençal communities and dealing with boredom and poverty any way they can: gossip, superstition, ancient feuds, modern rivalries, mushroom-hunting, obsession and, of course, murder.

A truffle-hunting pig proves a useful ally for the Commissaire in Death in the Truffle Wood, ultimately a story of culture clash between hippies and locals (it was written in the 70s). The book has some great snow-bound scenes which really rack up the tension and show an (for me) unexpectedly harsh side of Provence. 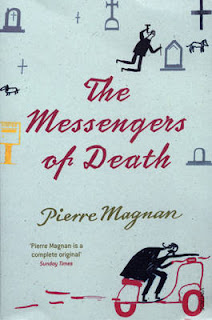 The Messengers of Death has a strong flavour of John Dickson Carr, opening with a retired village postman digging his own grave and features a fancy-dress murderer wielding an antique bayonet.

I’ve only managed to find these two titles in the Laviolette series in English, but if you like Fred Vargas (in particular if you enjoyed the cryptic scenes with the Normandy hunters in This Night's Foul Work), I'd definitely recommend seeking them out.

You can read Rich's Euro Crime reviews here (by searching for his name).

Discover which of Pierre Magnan's books are available in English (with reviews), here. (Death in the Truffle Wood and The Messengers of Death were both translated by Patrica Clancy and are still in print having been published 2006/7.)

These sound good. I've added them both to by TBR list. Thanks.

Delicious covers, and Death in the Truffle Wood is also an unusual & delicious book.

I am a Fred Vargas fan, so I'm grateful for these.

Apologise for late add-on comment. But for fans of slightly off-the-wall French crime writing, can I also suggest Daniel Pennac's mid-1990s series set in Belleville, Paris - starting with "The Scapegoat", then the wonderful "The Fairy Gunmother.

And apologies for only just seeing your recommendation. I'll look for Daniel Pennac.