I received a paperback proof of Death in August by Marco Vichi at the weekend. It's due out in June from Hodder & Stoughton. ( I mentioned it before when it was to be called Inspector Bordelli)

There are many reasons to be cheerful about it:

1) gorgeous cover
2) it's the first in the series which currently numbers four
3) it's actually quite short (not a 400 page opus like most of the Dagger submissions!) and contains a sampler of book two which is due out in January 2012.
and most excitingly:
4) it's translated by Stephen Sartarelli (of Camilleri fame) and has some of his notes at the back. 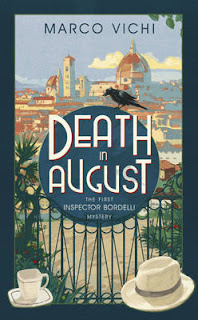 Florence, summer 1963. Inspector Bordelli is one of the few policemen left in the deserted city. He spends his days on routine work, and his nights tormented by the heat and mosquitoes. Suddenly one night, a telephone call gives him a new sense of purpose: the suspected death of a wealthy Signora. Bordelli rushes to her hilltop villa, and picks the locks. The old woman is lying on her bed - apparently killed by an asthma attack, though her medicine has been left untouched. With the help of his young protege, the victim's eccentric brother, and a semi-retired petty thief, the inspector begins a murder investigation. Each suspect has a solid alibi, but there is something that doesn't quite add up ...
Posted by Karen (Euro Crime) at 12:51 pm

A book I would definitely loe to read. Setting, mystery, great cover... Here's a tease from a new culinary mystery: Crunch Time

Sounds good, especially with that translator! I'll look forward to this one, thanks for the tip.

Lovely cover! There seems to be a trend with this sort of design, which I very much like. I only wish we could have something similar here in the US!