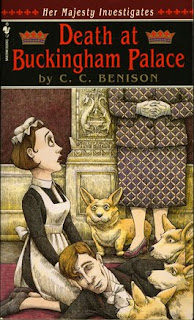 This is the first in a three book series which has the Queen assisting in investigations and was published in 1996.

The first in a series in which Her Majesty The Queen, with the help of housemaid, Jane Bee, investigates some mysterious murders at the royal residence. Jane believes her friend, Robin Tukes, a palace footman has been murdered - and so does a VIP who asks Jane to help her investigate. 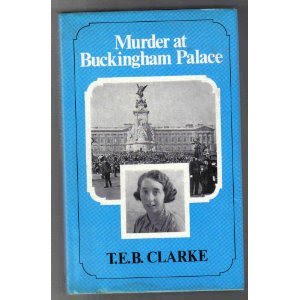 This one's a bit older, coming out in 1981 and according to wikipedia: "purports to tell the story of a hushed-up murder in the Royal residence in 1935. Despite its including 'documentary' photographs, there is no external evidence that the book is anything but pure fiction."
Posted by Karen (Euro Crime) at 7:48 pm

As the history of the English (and Scottish) royal family is stuffed full of crimes and other dramatic events - perhaps no authors can think up anything more vivid!

Peter Lovesey also had a series starring Edward VII and Rhys Bowen has a series with a distant relation to Queen Victoria.