I've just added this title to my Scandinavian Crime Fiction Published in 2011 amazon list which now numbers 24 and it's only April...

Fear Not, Anne Holt's fourth in the Vik and Stubo series will be published in July by Corvus. 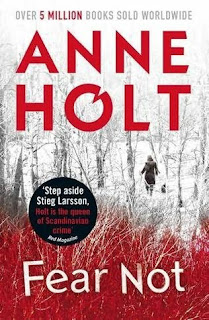 A drug addict dead in a basement, a young asylum seeker floating in the harbour, a high profile female bishop stabbed to death in the street. What is the connection? During a snowy Christmas season in Norway, criminal psychologist and profiler Johanne Vik finds not only her husband and herself but also her autistic daughter drawn into the investigation of a number of disturbing deaths. Her husband, detective Adam Stubo, has been dispatched to Bergen to investigate the shocking Christmas Eve murder of a local female bishop. Meanwhile, in Oslo, dead bodies keep turning up, though the causes of death vary. Before long, Johanne will incredulously discover something that will link them all.

Anne Holt's Fear Not is a thrilling crime novel that raises questions about religion, human rights, and the very nature of love itself. Anne Holt has the courage to go beyond conventional crime writing and peppers the story with red-hot political issues.

Do have a peep at the sticker on the otherwise attractive cover!

I'm not sure yet if this is translated by Kari Dickson who has translated the previous three Vik and Stubos.
Posted by Karen (Euro Crime) at 1:48 pm