I've been looking through Quercus's Autumn catalogue and it lists a new Roslund-Hellstrom (authors of the excellent Three Seconds) called Redemption to be published on 29 September and translated, as before, by Kari Dickson.

This now makes a full list of 25 titles on my Scandinavian Crime Fiction Published in 2011 amazon list (though it includes the odd US publication) so I'll soon be starting part deux it seems.

An interesting thing I've discovered is that Three Seconds is not the third in the series - Redemption is and Three Seconds is actually the fifth which might explain why the main character seemed to change abruptly from Box 21.

No UK cover yet but here is the blurb:

John Meyer Frey rots on Death Row in Utah for murdering a girl when he was seventeen. His victim's father is desperate for revenge, while his prison guard is torn by feelings of compassion for the young man. Both of them see their hopes thwarted when the killer dies of heart disease before he can be either justly punished or attain redemption.

Across the other side of the Atlantic a cheap crooner by the name of John Schwarz earns his daily crust on a ferry between Finland and Sweden. One night he sees a drunkard harassing several women and loses his temper, beating the man so badly that he ends up in hospital. The incident would normally be dismissed as just another drunken brawl, but Detective Inspector Ewert Grens is made suspicious by certain details of the case and investigates further.

This will initiate the most remarkable criminal investigation of the sullen, acerbic widower's career, which not only shocks him to the core but blows apart the worldwide debate on the death penalty - and the wider conflict between public justice and private revenge. Moving, harrowing, disturbing, Redemption is the third crime novel by Roslund and Hellström, combining a hard-hitting plot with a dark, multi-layered narrative and a killer twist.

You can find out more about the books and authors on their website and here's a promo picture for the film of The Beast featuring a familiar face to Swedish Wallander Series 1 viewers: 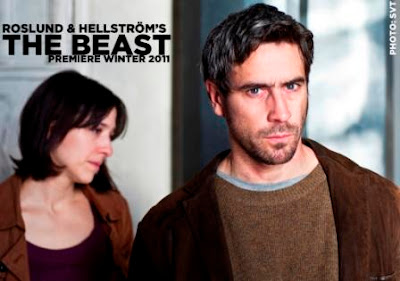 oh, that's Mr Rapace, n'est ce pas?! I remember being told that 3 Seconds does not follow on immediately from Box 21, which could explain why there is no reference to the ghastly ending of Box 21 in 3 Seconds......

Good to know there is another book by R/H coming out ,though they are certainly grim and cynical....not as much as Lief Persson, though.

Prison is full of people who dont deserve to be in prison http://www.prisonexposed.com