I went to London Book Fair today and picked up catalogues and what-not and also bumped into Don Bartlett, who is not only the friendly, charming and talented translator of Jo Nesbo and KO Dahl amongst others, but is also such a gentleman that he even asked after the cats! 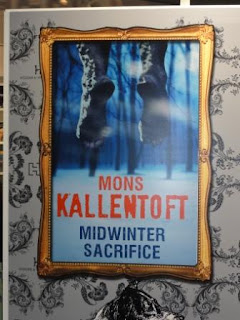 Anyway, spotted on one of the huge stands, was this huge poster. My friend and I took one look at it and said Scandinavian. And yes, it's Swedish and will be published in October by Hodder & Stoughton.

Synopsis:
It is the coldest February in recent memory. In the early hours of a particularly freezing night, the body of a man is found hanging from a lone oak tree in the middle of the withered, windswept plains outside Linkoping, Sweden. The young superintendent Malin Fors, a single mother plagued by personal tragedies, is assigned to the case. Together with her colleagues from the Violent Crime Squad at the Linkoping Police Department, she must track down the identity of the man hanging from the tree and the reason he ended up there. And at the same time they must follow in the frigid wake of a killer - a manhunt that takes Malin Fors into the darkest corners of the human heart.

With Midwinter Sacrifice, I've now begun part 2 of my Scandinavian Crime Fiction Published in 2011 on amazon. Part 1 is here.
Posted by Karen (Euro Crime) at 8:36 pm

I hope that you enjoyed the day, and that your companion arrived despite the trains! This new novel looks like good news for those of us who like Scandinavian crime.