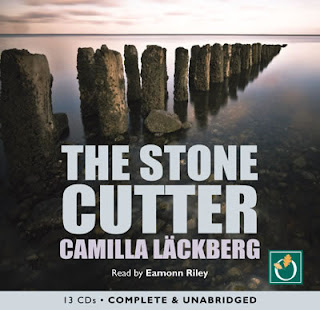 The Stonecutter is the third in the Patrik and Erica series set in the real-life summer getaway of Fjallbacka. As with The Preacher, The Stonecutter has Patrik investigating a crime with Erica more to the background, having not long given birth to their daughter and suffering from post-natal depression.

The body of a young girl is found in the sea by a fisherman. When Patrik is called to the scene, he recognises the girl as the daughter of Erica's new friend Charlotte. Initially the death is thought to have been an accident but it's soon clear that it was murder. Such a motiveless crime has Patrick and his team making slow progress. Charlotte and her husband Niclas are living with her mum, Lilian and her sick husband Stig. Lilian has been feuding with her neighbour and soon points the finger of blame at him and also his son who has Asperger's Syndrome. In addition Niklas is estranged from his parents who live in the same town. All the investigating and interrogating opens a huge can of worms and all the families involved will never be the same again.

Interspersed in the current day activities is the historical tale of a local stonecutter and his wife, told in short segments which eventually ties up with the present day.

The Stonecutter is a lengthy listen - 16 hours - but I enjoyed it very much. It's my favourite of the three so far. However it has to be said that Patrik's team, including himself, are not the most efficient set of police officers you'll come across. I think their slightly bumbling nature and their humorous banter adds to the cosy feel of these books - at least to me - even though the crimes are horrific. It feels removed from reality. I'd worked out quite a lot of what was going on before Patrik, who needed a US crime tv-show to point him in the right direction. I am especially looking forward to The Gallows Bird as there's a humdinger of a penultimate sentence in The Stonecutter.

Eamonn Riley's narration was very pleasant to listen to and it's very useful to hear the correct pronunciations for the Swedish names and places.

More reviews of Camilla Lackberg's books can be found on the Euro Crime website.
Posted by Karen (Euro Crime) at 11:32 am

Thanks for the nice review, Karen. The ending had us saying "Wow" too. I translated #4 and have now turned over the series to Tiina -- I'll be doing more German from now on. Watch for Nele Neuhaus, as well as Tiina's translation of Jussi Adler-Olsen's Mercy from Denmark.