Jane Austen's adventures as sleuth have been documented for a while by Stephanie Barron and recently Lynn Shepherd rewrote Mansfield Park as a crime story with Murder at Mansfield Park and next May, there's to be a crime novel investigating her death. From Jane Austen champion, Lindsay Ashford and published by Honno: 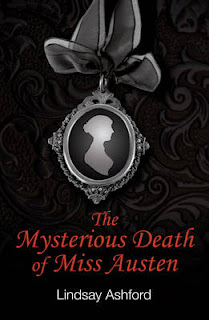 No one has ever been able to provide a satisfactory explanation for the tragically early death of Jane Austen. This intriguing novel delves into the private lives of the Austen family and comes up with a new and shocking possibility...

Miss Anne Sharp holds the position of governess at the Godmersham home of Edward Austen. She becomes friendly with his literary sister, Jane, when the latter arrives for an extended stay. Also a frequent visitor is a younger Austen brother, the maverick Henry. Anne becomes convinced that Henry is having an illicit affair with her employer’s wife and Jane too has her suspicions on this account.

When Jane Austen dies at the age of just 41, Anne is devastated. She begins to suspect that someone wanted her out of the way because she knew too much. Her fears are heightened by the death of yet another family member soon after.

The story opens with two letters establishing that Anne has sought to confirm her suspicions now that medical science has progressed sufficiently to assess the evidence presented by a tainted lock of Jane Austen’s hair. Natural causes or murder? Even after more than twenty years, Miss Sharp is determined to get to the bottom of the mysterious death of the acclaimed Miss Austen ...

A speculative exploration of the circumstances that might have precipitated the tragically early death of one of history’s greatest writers.

Details of Austen’s life and illness taken from her own and relatives’ correspondence.

Incidentally, earlier this year I read a teenage novel providing some insight into Jane's early years: I Was Jane Austen's Best Friend written by another crime writer, Cora Harrison.
Posted by Karen (Euro Crime) at 9:48 am